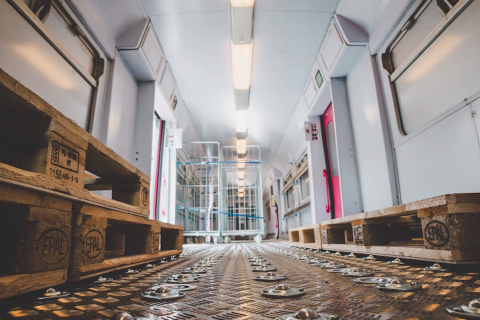 Rail Operations (UK) have revealed their latest ambitions for a Britain-wide, high-speed light goods service. Of all the current plans and existing operations, RO (UK) has the most extensive intentions. The specialist freight and rail logistics operator plans to reach out across England, Scotland and Wales. The proposals, already branded Orion, are at an advanced stage, and set to go live in April. The company claims the sector is already worth 16 billion pounds (17.6 billion euros) annually.

A widespread rebirth of high-speed logistics and light goods is growing closer. Some operations are already established, and new launches are in the wings. The Orion programme however, is set to be the most expansive. The service, on the back of converted passenger multiple units, aims to use a combination of logistics hubs and major passenger stations, to reach destinations from Aberdeen in the north, to Swansea and Plymouth in the west and south respectively. They say they can cut comparable road transit times in half, and that has caught the imagination of logistics operators up and down the country. There’s already interest in using passenger stations as distribution hubs for personal package collection, and delivery by rail seems a logical extension.

The real issue for light freight development in the UK has been capacity, observed Karl Watts, the chief executive of Rail Operations (UK) – the parent of Orion. He says that the historically fast freight train was among the speediest services on the network. “Intermodal freight was introduced to the UK system in the 1965”, he says. “Back then, a container train running at 75 miles per hour (120kph) was comparable with a passenger express. The requirement for freight now is to run at something like 110mph (176kph), or suffer the delays associated with making way for much accelerated passenger operations.”

Orion plans to redress the balance, with a fresh high-speed product that can return freight to the fast lines. Watts says that while passenger services have accelerated, and intensified, freight services have actually gone in the other direction. “Fifty-five years later, intermodal trains are still running at 75mph”, says Watts. “Average speed has got a lot slower – down around 23-24mph (35-40kph).”

Plans for deploying this April

There are many reasons put forward for that slowing down, suggests Watts, and some have compounded on each other. Whereas crew changes may have previously only taken a few minutes, conducted on the platform of an intermediate passenger station, they are now a much longer affair at a remote depot location. “Add to that the general lengthening of formations, to maximise operational efficiency. Adding payload slows train, impacting on acceleration”, he says.

All that has mitigated against any widespread reintroduction of light goods. Watts says Orion is a network of dedicated trains, rather than securing space on passenger services – a model already exploited by other operators. Orion however plans to deploy their rebuilt electric and bi-mode EMUs starting this April. Their first planned route is between Birch Coppice in the English Midlands and Mossend, near Glasgow. Watts says that the biggest logistics operators are showing interest in working with Orion, and Anglo-Scottish routes are a prime generator. “With 16 billion pounds (17.6 billion euros) annually in the parcels and light logistics market, and all of that currently going by road, this is a definite growth opportunity for rail freight”, concludes Watts.