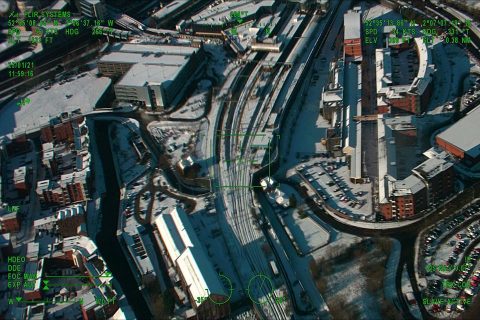 Line between Dundee and Aberdeen remains closed for another month

Bridge repairs in North East Scotland will take longer than originally anticipated. UK’s infrastructure manager Network Rail expects the line between Dundee and Aberdeen to remain closed until 22 February. The rail bridge, located three miles north of Carmont, has been closed since 15 January after masonry fell from the retaining wall on its southbound side.

The mixed traffic line between Dundee and Aberdeen – the only route in North East Scotland – will remain closed until Monday 22 February, says Network Rail. The North Sea oil industry city of Aberdeen remains cut off from southbound flows, with a very long detour only possible via Inverness. The bridge in question, between the fishing towns of Stonehaven and Montrose, will require engineers constantly on site to complete repairs.

The 180-year-old structure has been assessed by our specialist engineers, and Network Rail say they now have plans are in place to repair the bridge and provide additional strengthening. “We are working around-the-clock to safely reopen the railway as soon as we possibly can”, said Network Rail’s capital delivery director for Scotland’s Railway, Kris Kinnear. Network Rail has budgeted over 300 million British Pounds (335 million euros) between 2019 and 2024 for renewing and refurbishing bridges.

Network Rail is facing a perfect storm of disruptive events, and being stretched to keep UK rail traffic flowing soothly. Last week’s severe winter Storm Christophe affected parts of the UK not usually exposed to heavy snowfalls. The bridge collapse near Stonehaven was the most serious of incidents.

But there was also the totally unexpected subsidence to the line between London and Norwich – which also serves the ports of Harwich and Felixstowe. It has been a trying week for Network Rail.  Since Friday (22 January) engineers have been working to stabilise an embankment at Ingatestone on the Great Eastern Main Line. Although a serious failure, the incident has not entirely closed the route, single line working has necessitated amendment to several outer suburban services, including commuter trains from the Roman city of Chelmsford. Felixstowe intermodals and Harwich bulk trains should still however be able to reach London. Trains from Felixstowe, Britain’s busiest container port, are also able to divert via the recently reinstated curve at Ipswich.

Network Rail expect to have a clearer picture of the necessary repairs by Friday (29 January). Ellie Burrows, Network Rail’s route director for Anglia, was apologetic over the extended period of remedial works. “The work is taking longer than expected. She said. “I’d like to say a special thank you to those who have worked with us to give us access to the site and enable us to carry out these emergency repairs.” Network Rail further thanks their line-side neighbours for their patience. Heavily populated Essex is a long way from rural North East Scotland, but the discomfort of blocked lines is no less keenly felt.

In the meantime, in the English Midlands, helicopter-mounted thermal imaging cameras have been used to help identify ‘cold spots’ on the permanent way. The busy West Midlands loop generates much of the traffic for the West Coast Main Line, Europe’s busiest mixed traffic railway. Sub-zero temperatures and heavy snow threatened to close the line last weekend and into this week. In an effort more common in the colder parts of Europe, Network Rail Air Operations team, employed helicopter mounted infrared cameras to identify ‘cold spots’ – particularly on points and switches – to help guide ground resources as efficiently as possible. Wolverhampton station, a busy passenger and freight corridor (pictured) was particularly at risk.

Dave Penney, Network Rail’s Central route director, said thermal imaging cameras have been checking the heaters are working. “Anything reported to us from the skies can then be looked at straight away by the extra teams of people on the ground and fixed as quickly as possible”, he said.