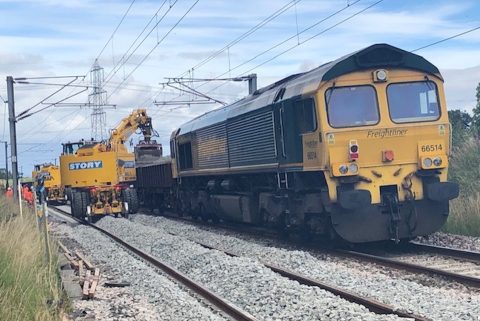 Over a dozen projects to improve the rail network have been identified in England, according to specialist consultancy Bootham Network Solutions. All of the proposals are relatively modest in scope, such as junction improvements and short lengths of infill electrification. The consultancy argues they could all be quickly developed up to ‘shovel ready’ status, and therefore help answer the UK Government plan to stimulate the green economy by rebuilding the national infrastructure.

The UK Government has backed a rolling programme of network enhancement, called the Railway Network Enhancement Pipeline (RNEP). This comes at the same time as funds have been committed for major projects between Manchester and Leeds, and when a call has been made for additional funding for the Crossrail project in London.

By examining projects on a continuous basis, the RNEP programme differs from the previous more rigid five year cycle approach. Robert Jenrick MP, the Local Government Minister had already called for ‘shovel ready’ projects to be brought forward, as a means of encouraging economic activity outwith London, particularly the North of England. Relieving Manchester’s congested Castlefield Corridor would, for example, be at the more expensive and complex end of the shopping list.

Consultant Chris Polack at Bootham Network Solutions believes that projects within the RNEP framework generally offer little scope for implementation in the short term. “Many of these enhancements are large and complicated with a requirement for extensive consultation, statutory approvals or major disruptive possessions of the operational railway”, he says. “They are not the type of scheme that can be developed quickly, and by no stretch of the imagination can they be described as shovel ready.”

Projects in the North West and South East

However, Bootham Network Solutions do back two projects currently within the RNEP process. They agree with a series of upgrades to the Cumbrian ‘Energy Coast’ line in the North of England, which recently benefitted from extensive bridge restoration work. They also advocate remodelling Haughley Junction in Suffolk. That would better serve the port of Felixstowe, and tie in with the industry-recognised Felixstowe to Nuneaton (F2N) package of enhancements, to which Polack’s consultancy adds reinstatement of double track on a section between Soham and Ely to provide greater capacity overall.

Polack argues that there are several identified interventions that could be developed, designed and delivered quickly. They would provide immediate benefit to the rail freight sector, aiding decarbonisation and enabling modal shift from road to rail. At the same time they would help to kick start the national economy.

Network Rail, the national infrastructure manager, has been following its own rolling programme of Continuous Modal Strategic Planning (CMSP). This has identified a range of network enhancements required to deliver forecast growth in rail freight deliveries. “Some of the enhancements identified are relatively straightforward and do not require statutory approval or large scale possessions.”, says Polack. “In addition to the CMSP process, there are a number of small infill electrification projects which would enable the conversion of a significant number of freight deliveries to throughout electric haulage with an immediate decarbonisation benefit.”

Enhancements that could be developed quickly to shovel ready status are listed by Polack. He says that these additional eleven projects, all in England, would all facilitate growth in rail freight:

Polack concentrates on England, and notes that transport infrastructure decisions in Scotland and Wales are taken by the devolved governments in those parts of the UK. However, by taking forward a number of smaller enhancement projects, Polack argues that there are better opportunities to support a geographically diverse supply chain, which spreads economic opportunities and risk.

The list of projects identified by Polack have already been considered to varying degrees by the rail industry. Freight operators particularly have identified infill electrification opportunities that offer a better operational and commercial case for the sector, and support the government’s decarbonisation strategy. “RNEP offers an established governance process for developing enhancements in a rigorous manner to ensure they deliver value for money”, says Polack. “There is capacity within the supply chain to develop these smaller enhancements and accelerate them through the RNEP process to the decision to deliver gateway.”

Polack concludes that there is an opportunity presented by the post-coronavirus agenda for the rail industry to help itself, by quantifying the benefits these enhancements, and making the case to government. “These enhancements should be progressed quickly through the RNEP so that they are shovel ready and can be delivered immediately once the government makes investment available”, he says.

Given the alignment of decarbonisation, coronavirus recovery, and the need to geographically rebalance the UK economy, the rail sector would seem to have no better time than now to have its lobby heard. The supply chain may be well advised to prepare its collective shovels.