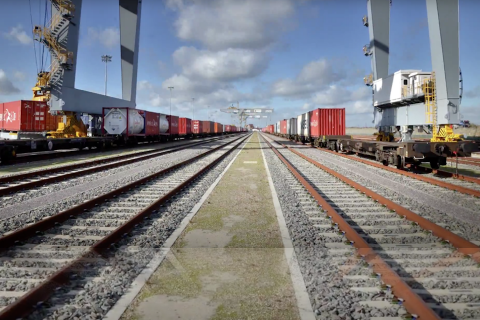 The UK operator GB Railfreight has agreed an extension to its existing management contract for rail freight operations at the DP World owned London Gateway facility on the lower reaches of the River Thames north bank. The nine-month extension will see GB Railfreight continue to manage an average of fifteen trains a day, including their own daily services to Hams Hall in the West Midlands and Masborough in South Yorkshire.

The extension of the relationship with DP World see the UK operator continue its involvement with the integrated port facility, which will celebrate its seventh anniversary next month.

As the establish rail manager at London Gateway, GB Railfreight can lay claim to operating out of the three busiest intermodal ports in the UK, namely Felixstowe, Southampton and London Gateway. The company claims to account for around thirty per cent of all containerised traffic in the UK.

London Gateway is the newest UK property and highest-profile possession of DP World, the Middle-East based multi-national trade and supply chain operator. London Gateway was the departure point for the very first New Silk Road train to leave the UK, bound for the Chinese city of Yiwu in April 2017.

Both GB Railfreight and DP World have recently announced ambitions for expansion in the UK. Earlier this month, GBRf started taking delivery of five re-engineered class 66 diesel locomotives. The locomotives are joining the fleet from operators in Germany, via leasing agent Beacon Rail. All five will be compatible with operations at London Gateway.

DP World also announced in August that they would collaborate Forth Ports, the owners of upstream neighbours Tilbury, in a joint bid for freeport status under a UK government initiative.