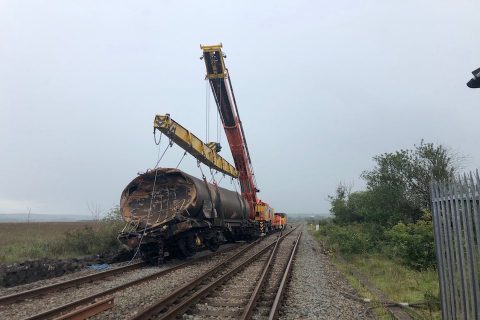 An interim report from the Rail Accident Investigation Branch points towards a brake fault as the primary cause of the derailment at Llangennech, Wales, which caused a massive fire and environmental damage. The UK accident watchdog says that the oil tanker train was almost certainly derailed by a seized axle that destroyed a set of points and tore ten massive tankers off the rails. Consequently, lines have been blocked in South Wales since 26 August. There were no fatalities nor serious injuries, but the derailment is among the most destructive in British network history.

If anyone in the community of Llangennech was still asleep after the cacophonous crashing that took ten tankers off the rails just north of their little station, they were rudely wrenched from their slumbers by the thunderous explosion that lit up the night. The sheet of flame that scorched the sky was closely followed by the sirens of almost every fire engine in Wales and an impatient knock on the door, demanding immediate evacuation. The fire took several days to bring under control, by which time ten wagons had been destroyed, and 330,000 litres of diesel fuel cargo had spilled into the adjacent wetlands, causing significant environmental damage.

The wheels of the train were going round and round

It has been a month since the accident, and work continues to remove the twenty-five tanker wagon train, which had been operated by DB Cargo UK on behalf of Puma Energy. Now the Rail Accident Investigation Branch (RAIB) has published a preliminary examination, putting the blame on a seized set of brakes and a jammed up axle.

The RAIB has found that all the wheels of the train were probably rotating freely when the train left the oil sidings at Robeston, part of the massive Milford Haven oil terminal on the south west coast of Wales. At some point during the journey the brakes on all wheels of the third tanker wagon of the train had become applied, and remained so until the derailment. It took just one axle to spell disaster.

While three of the four axles of the faulty wagon continued to turn, although their brakes were dragging, the leading axle ceased to rotate altogether, and consequently a flat spot developed on both of the wheels on this axle. The wheels were effectively grinding along for an undetermined length of the 50-mile (80-kilometre) journey and developed a substantial ‘flat spot false flange’ – a raised lip on the outer side of the wheel tread.

“When the train reached the crossover at Morlais Junction, travelling at about 30 mph (48 km/h), the false flange on the right-hand wheel caught on the converging stock rail and distorted the track, leading to derailment of both wheels”, says the RAIB report. “Around one hundred metres further on, the partly derailed wagon encountered facing points set to route the train to the right. The locomotive and the two leading wagons went to the right and the derailed third wagon went straight ahead. The third wagon turned over onto its right-hand side and became detached from the wagon in front of it. This caused the points and the track beyond them to be destroyed, and derailment of another nine wagons followed.”

The RAIB say they will now be looking at several critical points, including why the brakes on the third wagon became applied and remained applied. They’ll be looking at any other factors which may have contributed to the derailment – suggesting they’ll be examining the permanent way, although the track was substantially damaged in the derailment and incinerate in the subsequent fire. Investigators also want to know how the derailment led to the fuel spillage and fire, and the maintenance history of the wagon in question.

No date has been given for publication of a full report.