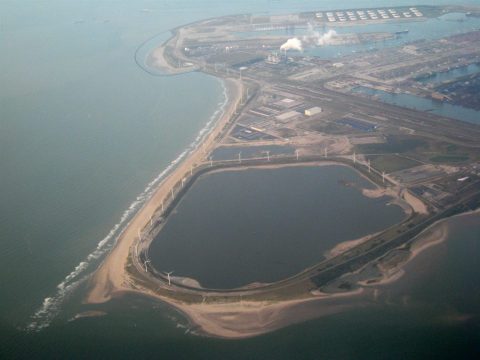 Rail freight operators in the Netherlands are frustrated about the poor accessibility of some parts of the Maasvlakte, part of the port of Rotterdam. In particular the Euromax terminal of ECT has been unavailable for days due to several storms that plagued the country over the last couple of weeks.

The strains were caused by sand, blown onto the tracks. As a result, trains were unable to use the last section of track on the far west of the Maasvlakte. This section leads to Euromax, which is located at the very end of the railway. Trains that did make it to the terminal were unable to leave, as they had got stuck.

More to be done

The terminal was inaccessible for some time after every storm. “As a result, our trains could not reach Euromax. Or they were just stuck there for days”, said one of the carriers. The sector does not point so much at the terminal itself, but mainly blames ProRail, the infrastructure manager. It should do more to prevent sand from ending up on the track or, in any case, remove it earlier, they believe.

ProRail reports that sand has indeed been blown onto the tracks at Yangtze Port, which lies to the west of the Maasvlakte. “There is not that much development on this new part of the Netherlands, which means that sand and wind get free rein in extreme circumstances”, says the rail manager.

The frustration was triggered due to the fact that the problems occured not once, but several times. Three severe storms hit the country in the last two weeks. After the first storm, Ciara, all deep-sea terminals at Maasvlakte were closed for some time, among others due to sand on the track. Storm Dennis, the second, caused two terminals to close its premises. In between, the backlog as not immediately solved.

“What is really frustrating is that the nets on the Maasvlakte have been removed. Axis counters could prevent sand from entering the railways. Since the outer counter has been re-opened, there have been a lot of problems with sand. And now Euromax terminal is out of operations”, explained Hans-Willem Vroon of interest group RailGood, after the first storm.

ProRail indicates that it is currently investigating what it can do to prevent this from happening the future. The company is thinking of placing higher screens, among other things.

The infrastructure around the port of Rotterdam has faced several limitations lately. Apart from sand on the tracks at Maasvlakte, the emplacement of Waalhaven has been closed for shunting of dangerous goods since September 2018. This is due to problems with the extinguishing facilities; a test proved that these facilities were not up to standard.

Last month, regulators in the Netherlands agreed that under strict conditions, shunting wagons with hazardous substances could be permitted again at Waalhaven Zuid. However, a week later an extinguishing pipe burst under pressure when it was subdued to additional testing, and the facility was closed again.

The temporary closure has had a major impact on the industry, as operators had to relocate to other shunting yards to keep operations running. They have expressed their frustration with the infrastructure around the port of Rotterdam in general. Some have called it a setback for the rail freight industry as it was ‘finally generating confidence in rail as a modality’. Assumptions that rail is unreliable could not be affirmed.