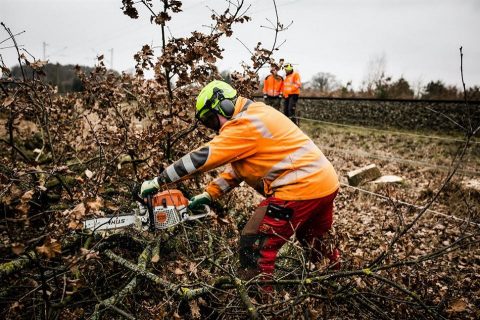 Rail freight traffic in the Netherlands is recovering after an extratropical cyclone known as Storm Ciara hit the country on Sunday, 9 February. Most of the tracks are available for operations. Kijfhoek marshalling yard is open. However, there are still some restrictions on the border between Germany and the Netherlands. The deep-sea terminals at Maasvlakte are closed due to strong wind.

In general, the Dutch freight infrastructure has kept up well. The team of the country’s rail infrastructure manager ProRail and its contractors have been working overnight between 9 and 10 February. As of today, most of the tracks are available for freight operations, and so is Kijfhoek marshalling yard, the largest one in the Netherlands. Several terminals in the port of Rotterdam including RSC Waalhaven, Koole and EMO have relaunched their activities.

However, even the mentioned facilities have some restrictions. EMO asks its customers to refer to the contact persons directly in order to get more updates. “Due to storm Ciara, there are still limited activities at the EMO terminal. This means that based on the actual and predicted wind speed there is still no discharging possible and reloading on a limited basis. At the moment we are monitoring the weather conditions very carefully to get all our operations up and running safely as soon as possible. For more information we kindly refer you to your contact person within EMO”, the statement at the company’s web page says.

At the same time, several sources report that the deep-sea terminals at Maasvlakte will not open until the end of today. Among the reasons are the strong wind and piles of sand lying on the tracks. “What is really frustrating is the nets on the Maasvlakte has just been removed, resulting in a lot of sand lying on the tracks. This could be solved by installing axis counters. Since the outer counter has been re-opened, there have been a lot of problems with sand. And now Euromax terminal is out of operations too”, explains Hans-Willem Vroon of interest group RailGood.

Meanwhile, there were troubles on the border between Germany and the Netherlands, especially near Emmerich on the German side. Most of the problems have been resolved, although some trees are still lying along the tracks. The cross-border railway from Bad Bentheim in Germany to Oldenzaal in the Netherlands has been restored completely.

Two other cross-border lines, the Viersen – Venlo and Oberhausen – Zevenaar sections, are also open for operations. However, these two stretches work with some restrictions. Traffic on the Viersen – Venlo line is limited towards Germany while the Oberhausen – Zevenaar line has only one available track, another is blocked. DB Netz, the German rail infrastructure manager, is working on its full recovery.