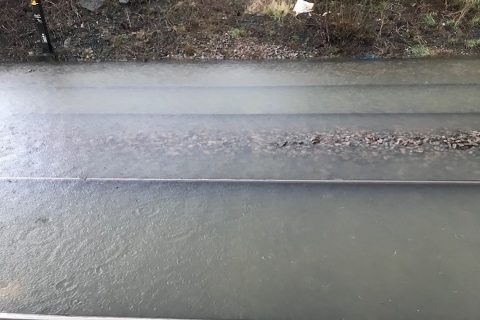 Published on 10-02-2020 at 17:34
Flooding like this has blocked the West Coast Main Line after Storm Ciara image Network Rail

The British Isles have been buffeted by one of the fiercest storms in a decade, and the busiest long distance route in the country has been knocked out of action.

The West Coast Main Line (WCML), which lInks London with Birmingham, Manchster, Liverpool and the central belt of Scotland to Glasgow and Edinburgh, has been put out of action by Storm Ciara. Many other lines were hard hit too, with widespread disruption and engineers braving grim conditions up and down the network.

Scotland out of the picture

The line has been hit by very high winds over Sunday, followed by torrential rainfall, which has caused the danger of substantial objects being blown on to the line, and the potential for damage to overhead wires. What knocked out the line however was a severe flooding incident at Caldew near Carlisle, on the border between England and Scotland, preventing journeys continuing to Glasgow and Edinburgh.

Carlisle is a market town of around 100,000 inhabitants and lies at the confluence of four rivers and four railway lines. The citizens are as familiar with the problems of flooding as they are with the sound of passing trains.

The West Coast Main Line passes north-south through the centre of the city. While the extensive freight yards lie to the north, the major junctions are all to the south and sometimes suffer the same fate as the outlying community of Caldew has this weekend.

There are less intense flooding everts at other parts of the line, principally north of Preston, midway between Liverpool and Manchester. Preston is currently the northern limit of services for passengers and freight. As of Monday afternoon, no services were running through the Lake District. Southbound trains were being held at Carlisle.

The diversionary freight route, between Carlisle and Settle is less likely to flood, but covers even more rugged terrain. However, it is preferred by many freight operators, due to the lack of paths on the WCML. Both bulk and intermodal loads use this route frequently.

With the extreme wind and rain storm giving way to more seasonal squally and wintery showers, both Network Rail and passenger operators are hopeful of resuming services late on Monday or on Tuesday, with the likelihood of speed restrictions and some cancellations possible due to stock displacement.