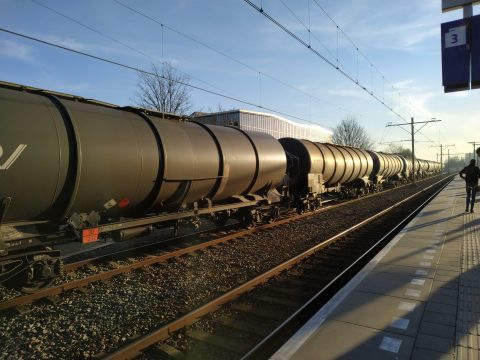 Restrictions dangerous goods in Port of Rotterdam: ‘this should not last months’

Earlier this month the emplacement of Waalhaven in the port of Rotterdam was closed for shunting activities with dangerous goods. A hard hit for the hinterland transport by rail, the industry says. “We have managed to keep operations up and running, but it should not last months”, can be summarised the response of the parties involved a week after the closure.

The reason for the temporary stop was a test of the fire extinguishing system at the emplacement. The test results were negative: the fire brigade and the incident prevention team of infra manager ProRail could not perform their work properly, and thus the shunting yard was deemed unsafe. The shunting of dangerous goods had to be done elsewhere, and for a longer period of time, infrastructure manager ProRail announced on 13 September.

A swift response of all the parties involved followed in the days after. The shunting activities have mostly been relocated to Kijfhoek, the largest emplacement of the Netherlands. “For now this works for us”, says Markus Bertram, General Manager of LTE. As a carrier, his company pulls seven trains per week to or from the emplacement in the Dutch port. These operations are up and running till now, but at the expense of extra manpower and longer lead times.

“Where a change of locs takes an hour in Waalhaven, the process in Kijkhoek is different and takes several hours. We had to reschedule the entire planning. We have some spare capacity to manage emergency situations like these, but this should not last months”, he comments.

With this last remark he echoes the sentiment of the industry. “We have managed the first response by working twice as hard to operate the same number of trains. But on the mid to long term, this definitely hits rail freight as a modality”, said Arnoud de Rade, Manager Director at Rotterdam Rail Feeding.

Waalhaven is a crucial yard for the transport of containers, tank containers, trailers and swap bodies that come in and out of the port and are forwarded to destinations such as Venlo, Tilburg, Coevorden and Duisburg, but also further on to Poznan, Milan, Vienna, Budapest and China. Rail plays an important role in this hinterland transportation, but is also at fierce competition with the road.

“That is exactly why a hit like this comes at a bad time”, says de Rade. “The demand was surging, and we were making steps ahead with new measures taken to improve rail as a modality. But an event like this supports the idea of customers that rail is not reliable as a transport option. It is a setback for us as a sector trying to generate confidence in rail freight.”

According to several companies the trend has already commenced. Shippers are temporarily not taking the train to Rotterdam, they have better options. And this is not only the truck, explains de Rade. Shippers are already relocating their shipments to other ports, such as Antwerp or Duisburg. Volumes are already slipping away.”

“This is the commercial damage of the event”, says Hans-Willem Vroon, director of interest group RailGood. “Of course, there are additional costs on the short term, which is bad enough. But on the long term, the impact is that of a mini-Rastatt to the port of Rotterdam.”

“I cannot understand how it has actually got this far”, adds LTE chief Bertram. Although the halt of operations were a sudden, the fire extinguishing test proved what had been claimed by the sector for a longer period of time: maintenance of the crucial infrastructure around the port is not up to date, he explains.

“The Harbour Line requires serious maintenance on several levels. This has been pointed out for many years, but it still had to come this far. This is something hard for me to comprehend. The good news is that it has provided a wake up call on the highest level.”

Indeed, ProRail has clearly acknowledged the problem. Twice a day a conference call is made between the port, carriers and operators to identify possible challenges. In Kijfhoek additional manpower is monitoring the situation to adequately respond to upcoming issues. “Operations at ProRail Traffic Control in Kijkhoek are running more smooth than ever before”, says Vroon.

The response reflects good cooperation between all stakeholders. Or as ProRail’s deputy CEO John Voppen commented: “Freight trains continue to run despite the restrictions in South Waalhaven. A remarkable effort thanks to the intensive coordination we have had for a year now with the terminals at the port, so that we proceed with logistical planning in this special situation.”

However, the final impact of the event on rail freight to the port of Rotterdam all depend on time. Bertram: “We need a solution as soon as possible. This week was survival. We cannot bear weeks or months.”

Temporary stop for hazardous goods in Port of Rotterdam