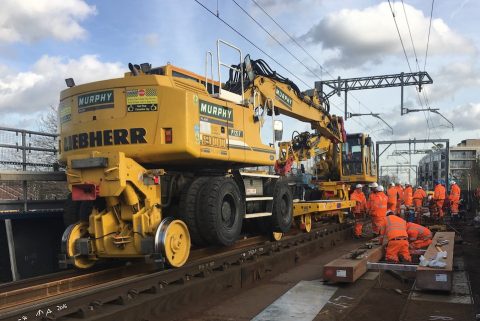 Network Rail has said that work to reinstate the Barking – Gospel Oak line in London is progressing very well and there is hope for a firm reopening date to be confirmed in the coming week. The mixed use line, which is a vital passenger and freight link, was wrecked by a derailment on 23 January. Read details of the incident here.

It has been a round the clock operation that has seen significant resources allocated to the scene. Work has however been progressing on what has been one of the most extensive incidents of damage to the UK permanent way in living memory. While much of the heavy lifting has been completed, there is still work to do before the line can be handed back to traffic.

As reported earlier, more than two and a half miles (around 4km) of the north London route between Barking and South Tottenham was damaged in the incident on 23 January. Just after 0600hrs that morning, a westbound hopper train suffered a wagon derailment between Leyton Midland Road and Walthamstow Queens Road passenger stations. The wagon dragged over the line, destroying track and badly damaging ten bridges and lineside equipment.

The independent safety authority, the Rail Accident Investigation Branch, is currently investigating the cause. Fortunately, no other trains were involved, and no injuries were reported.

The derailment in numbers

In context, Network Rail say that reinstatement will require replacement of thirty-nine lengths of rail, 5300 concrete sleepers, 900 wooden sleepers on bridge decks, and removing and replacing 10000 tonnes of ballast. The historic bridges damaged will also require bespoke timbers to be replaced.

Although large volumes of materials, the rails themselves are a relatively small part of the stockpile held at Eastleigh, in Hampshire. Ironically, that location was fell foul of a derailed intermodal train a few days later. See details here.

Temporary repairs to the track have seen freight and passenger services largely restored, although new crossovers are required for full reinstatement. The more extensive damage in London means that route remains closed.

Both these incidents have been handled at the same time as the British Isles have been battered by severe storms – including Storm Ciara – which caused extensive disruption earlier this week. Notable incidents included flooding on the West Coast Main Line (see “Ciara” here). Storm warnings are again in force for this weekend as a violent front named Storm Dennis approached from the Atlantic.

Ellie Burrows, the Network Rail route director for Anglia said that engineers have made huge progress on the repairs in London. “We have some critical works this weekend which could be impacted by the forecasted storm”, she said. “Once this work is complete we will be able to confirm when the line will reopen. I know this has caused a lot of unexpected disruption but the end is in sight”.

Freight operators, particularly out of River Thames ports, have been required to find alternative routes. Commuters have been forced to find bus replacements or alternative routes via London Underground services. A firm date for reopening will be welcomed by all concerned. Hearts go out to the engineers facing another wet and windy weekend on duty.