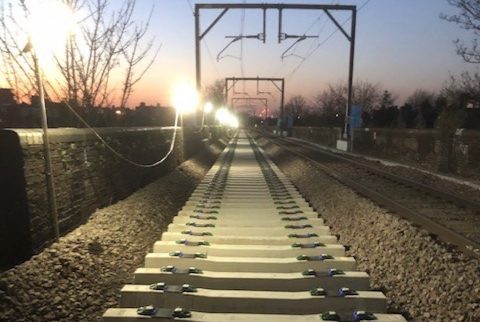 With the busy north London Barking to Gospel Oak line still out of action, questions still remain unanswered as to the cause of the incident, which has left freight operators seeking alternative routes and commuters without services for weeks to come.

It has been two and a half weeks since Londoners in the East End were awoken by the cacophony of a freight train wrecking the permanent way over a 4000m stretch of what has become one of the most intensively used mixed-use lines in the capital.

Just after 6am on Thursday 23 January, an eastbound freight train suffered a derailed wagon between Leyton Midland Road and Walthamstow Queens Road passenger stations. The train dragged the wagon, which extensively damaged the permanent way, including several bridges. The incident has closed the commuter line and forced freight operators, including those out of Dagenham and Tilbury docks on the Thames, to reroute flows. We covered the incident in detail here.

The huge engineering task is underway to repair the line, but it is expected to take some weeks, and Network Rail say a firm assessment cannot be given until later this week. They are also remaining silent on the case of the initial derailment, which is causing some speculation.

The equally disruptive Eastleigh derailment, which happened just a few days later on 28 January, was quickly traced to a faulty fastening on the rails, which allowed the track to spread under the weight of a passing freight train. Six intermodal wagons came off the rails there and Network Rail held up its hands a few days later over a maintenance issue. However, the Barking incident remains a mystery.

A Network Rail source said that was protocol under the circumstances. “We have to wait for the conclusion of the investigation before we can comment on any causes. This is being investigated by the rail accident investigation branch”.

The UK safety authority, the Rail Accident Investigation Branch (RAIB) has since released more of the technical details. Their statement says that the train was hauled by a class 66 diesel locomotive and consisted of 22 wagons carrying construction soil. Once the braking system alerted the driver, the train was stopped, with one wheelset on the 16th wagon derailed. That was enough to do extensive damage to the track, other railway infrastructure and the wagon.

RailFreight.com readers have been expressing opinions on the derailments, which have both significantly disrupted passenger traffic. “The Eastleigh incident following on the heels of the derailment on the North London line has exposed some problems”, noted one reader. Referring to the Eastleigh derailment, comments included: “Network Rail have quickly accepted responsibility. It is fortunate no passenger trains were involved”.

“There must be questions about the ongoing monitoring of track conditions and the adequacy of the methods used”, said another. “NR has made a lot of noise about this in the past but there seems to be a continuing problem with incidents like this none of which help rail freight’s competitive position”.

The RAIB, which is independent of the industry and the government regulators it is working on the Barking incident.“Our investigation will identify the sequence of events which led to the accident and the factors that contributed to its consequences”. They intend to examine the track, the bridges damaged and the wagons, as well as seeking out any underlying factors. Network Rail has undertaken to issue an update later in the week.