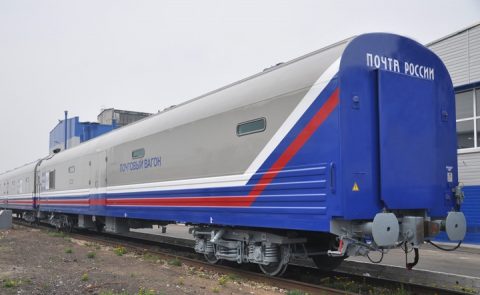 Russian Post has signed an agreement with Tver Carriage Works, part of Transmashholding, and VTB Leasing for supplying and leasing 107 postal railcars valued at 3.7 billion Rubles (more than 49.1 million Euros). They will be used for improving postal services inside the country and for launching the postal train to China. All the units will be manufactured at Tver Carriage Works and will be delivered by the year’s end.

Tver Carriage Works will supply 83 postal railcars of type 61-4505 (with office spaces) and 24 units of type 61-4504. The lifetime of the units is 40 years, the speed limit is 160 kilometers per hour. Some of the railcars will be equipped with adjustable height couplers and they will have the option for bogie exchange. This will enable the use of these cars on the railway network of China.

“The new railcars are distinguished by high manufacturability and increased carrying capacity, that is achieved, inter alia, by coupling two cars – (although) one conductor team serves them. We gradually change the rolling stock that reached the limit of service life in the new units to provide timely and quality delivery of hundred millions of mails,” said acting deputy CEO of Russian Post Igor Chebunin.

Currently, Russian Post owns 712 postal railcars. The postal company has a plan to purchase circa 300 new railcars between 2017-2019. As part of this plan, Russian Post acquired 45 railcars last year. Also, some upgrading was done in previous years: 50 railcars were purchased in 2015, and 10 units in 2016.

All the postal railcars run between Moscow and Vladivostok. In August 2014, Russian Post launched the postal train between the cities. Initially, it ran every other day, but in 2017 it became a daily service. The new units will also be used on the Moscow – Vladivostok postal railway route.

Moreover, Russian Post and Russian Railways (RZD) have been discussing since 2016 the launching of the Berlin-Moscow-Beijing postal train. The parties intended to start the new service in 2016, but this was delayed to 2018-2019. However, currently 2019 or even 2020 are considered the most feasible years to launch the postal train from Russia to China.