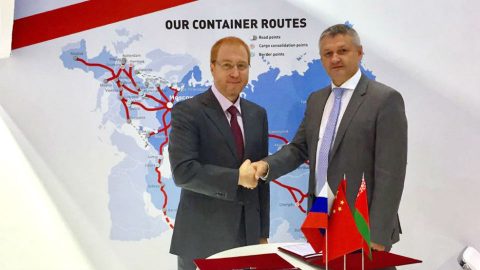 RZD Logistics and the Belarusian Railway are launching a regular service shipping LCL cargo in baggage train cars on the route Beijing – Moscow – Minsk. The service is called Rail Jet and promises a delivery time of eight days.

The first shipment of this kind was carried out on 21 July this year. A shipment of e-commerce goods was carried on a postal-baggage car of a passenger train between Beijing and Moscow in six days. The service has now been established as a regular connection, the two parties agreed. It was one of the topics as part of a broader cooperation signed in the framework of China (Shenzhen) International Logistics and Transportation Fair (CILF) in Shenzhen (China) last week.

Another important project implies using TCU Kolyadichi as a distribution center for goods from China, which are delivered to Europe. In this and other projects the companies agreed to jointly use the park of train cars for shipments’ organisation.

“Today we see that China is very interested in reducing the time of delivery, including the delivery of e-commerce goods. It is also interested in the appearance of modern distribution centers in areas of entry points to Europe. These centers should be capable to consolidate large volumes of cargo and distribute smaller volumes across the territory of Europe”, commented CEO of RZD Logistics Viacheslav Valentik.

The parties moreover agreed to develop transit container shipments across border points Brest–Terespol, Svisloch–Semyanuvka and Bruzgi – Kuznica Belostockaya with the participation of the state-owned company Belintertrans-Transport and the Logistics Center of the Belarusian Railway (BTLC).