Rail freight traffic on Rail Freight Corridor North Sea – Mediterranean (RFC North Sea – Med), one of Europe’s nine core network corridors, witnessed it biggest rise last year since the start in 2013. Traffic volumes increased by 18 per cent compared to 2016. Since the start, the number of trains rose by 38 per cent on the initial corridor lines of 2013. This was concluded in the corridor’s annual report 2017.

RFC North Sea – Mediterranean connects the Netherlands, Belgium, the Grand Duchy of Luxembourg, the United Kingdom, France and Switzerland. Since January 2016, it links main European ports such as Amsterdam, Rotterdam, Antwerp, Zeebrugge, Dunkirk, and Marseille to the industrial zones of Western Europe and to the gateways of Southern Europe, with 5500 kilometres of lines. The corridor is also connected to the RFCs Rhine – Alpine, Atlantic, Mediterranean and North Sea – Baltic. 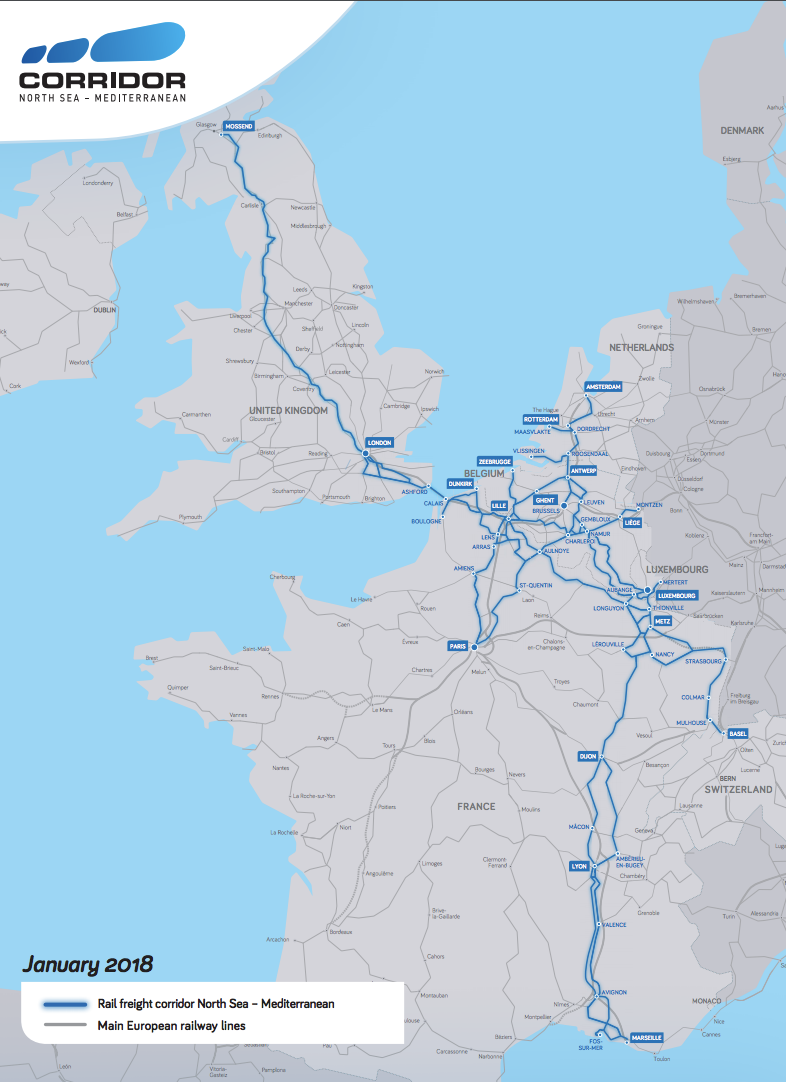 The evolution of traffic per corridor border indicates the geographical spread of the traffic on the corridor. This was significantly lower at Aubange/Rodange and Aubange/Mont-Saint-Martin, largely due to traffic works, the report states. “In general, we see a steady rise in traffic on the Benelux-Switzerland traffic, which for the majority explains the good figure for Basel/St.Louis.

“More precisely, traffic scheduled via Aubange/ Rodange and Bettembourg/Zoufftgen is often rerouted via Aubange/Mont-Saint- Martin because of temporary capacity restrictions, or vice versa. At the franco-swiss border of St.Louis/St.Johann, a small increase was noted. This also means that the influence of re-routing the traffic from Germany to Switzerland via RFC North Sea – Med following the Rastatt incident was very little, and not significant overall.”

Guillaume Confais-Morieux, Managing Director of the corridor explained: RFC North Sea – Mediterranean uses extensively the customer input to fine tune the offered capacity. Since its beginning, it applies a survey for capacity needs sent to all stakeholders and better adapt the offer to the market needs. And since 2017, this survey is common for all nine European Rail Freight Corridors and applied for timetable 2019. In addition, the capacity offered is fully coordinated at each border point, and integrates a visibility on the works impact risks.”

Big steps were made by various infrastructure managers towards the deployment of the European control and command system on the Rotterdam-Antwerp-Basel route. CFL Infra and SNCF Réseau simultaneously put in service both sides of the border on 17th October 2016 on the Bettembourg – Thionville – Uckange section. Also, on the 3th March 2017 the border section of Aubange – Rodange – Mont-Sait Martin became operational with a complete commissioning.

ERTMS is already in service on the main sections of the North Sea – Mediterranean corridor in Belgium and Luxembourg; deployment works are under way on the French side and the completion of the whole route is planned for 2022 (Longuyon – Basel).

A list of more than 60 investments for a total cost of more than 7 billion euros was published last year. These investments take into account the project list of the North Sea – Mediterranean corridor. Moreover, changes are to be expected in the corridor’s routing. The letter of intent on the extension of the corridor to Geneva was submitted in May 2017. The extension beyond London, foreseen by EU law, was prepared in December 2017.

Confais-Morieux stated that the numbers represent a clear signal of a restart of the international rail freight traffic. “We do our best to adapt our offer to this rise of demand from the railway undertakings and the market. It proves that for long distance, rail meets both ecological and economical sector’s expectations.”