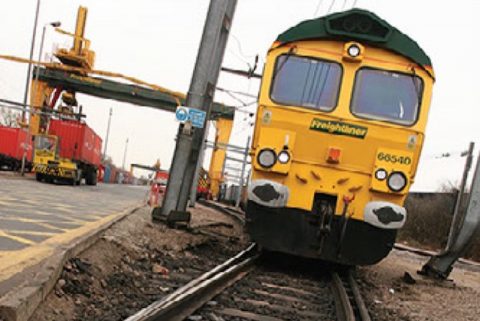 The British government has published its post-pandemic plans for transport, and rail freight plays a significant role. The plan addresses travel, and transport patterns changes and redefines the route map for transport and logistics in the next three decades. However, there remains a stated commitment to road development, which is at odds with the sustainable goals for a reformed zero-carbon economy.

A plan from the UK government, “Decarbonising Transport – A Better, Greener Britain”, seeks to address changing work patterns, shopping and business travel. It is being touted as a precursor to a detailed Integrated Rail Plan, which the government says is published in due course. It will describe how HS2, Northern Powerhouse Rail and other major projects will deliver benefits, including carbon savings more quickly and effectively than under the original proposals, which would have left the North and Midlands – and the environment – waiting twenty years any major improvement.

Road in the ‘clear majority’

While making overtures to the development of rail freight, the plan also outlines a review of the National Policy Statement, which sets out government policies on the national road network. “Our ambitious roads programme reflects that in any imaginable circumstances the clear majority of longer journeys, passenger, and freight, will be made by road”, says the plan. Rural, remote areas will always depend more heavily on roads, say government sources. In November, the UK government said that new diesel and petrol cars and vans would no longer be sold from 2030 and that all new cars and vans must be fully zero-emission at the tailpipe from 2035.

The Westminster government has also heralded wholesale changes for the road haulage and logistics sector, making conventionally-fuelled heavy goods vehicles (HGVs) largely obsolete. “We have published our consultation on ending the sale of all non-zero emission HGVs from 2040, with lighter HGVs from 2035”, said transport secretary Grant Shapps. “I can also commit to consulting on setting phase-out dates for all non-zero emission road vehicles, with 2040 as a backstop, setting a path to a time when every vehicle on the roads will be zero-emission.”

Turning to railway development, Shapps outlines in the plan how the proposed new integrated rail authority will oversee the reform of the sector. “Between now and 2050, Great British Railways will deliver a programme of further electrification, together with the use of battery and hydrogen trains, to enable a zero-carbon railway”, he says. However, with the rail freight industry remaining under private management, the government plans to adopt a persuasive approach. “Policies will incentivise the take up of low carbon traction by rail freight operators”, he said. “Freight Operating Companies will use more electric and low carbon traction. Investing in High-Speed rail and extra capacity on our network will support modal shift to rail.”

According to the plan, the “ambition” is for all diesel-only trains to be removed from the network by 2040. “By 2050, the rail network will be net-zero”, says Shapps. “The rail freight market has changed significantly over the last twenty years, with a shift from the dominance of coal to intermodal and construction traffic flows. The geography of rail freight has subsequently changed, with the consolidation of rail freight on already partially electrified routes. This means that relatively short stretches of new infill electrification could allow a significant rise in the electric haulage of freight. We will pursue such electrification to maximise the benefits gained from rail freight.”

Commenting on the publication of the Government’s Transport Decarbonisation Plan, Maggie Simpson OBE, the Director-General of the industry’s representative body, the Rail Freight Group, broadly welcomed the plan. “This plan sets out a clear vision for the decarbonisation of freight transport and recognises the vital role that rail has to play in reducing carbon emissions”, she said.

Simpson went on to address the specific targets the plan makes for the sector. “We welcome the Government’s commitment to setting a target for rail freight growth and to the electrification of strategic gaps in the network, allowing more freight to be electrically hauled”, she said. “Businesses across the country are looking to make more use of rail freight as they work to decarbonise their supply chain. This Plan should help underpin the investments they need to make to do so – but it must now be backed by the necessary action to deliver on the Government’s ambition,” she added.

Although not specifying, as yet, any definite parameters, the plan proposes targets for rail freight growth. “We are investing in the rail network for freight, building on the £235 million of investments made in Control Period 5”, says the plan. The investment in the period referred to, 2014-2019, is just a fraction of the equivalent spend on road projects. However, the plan acknowledges the importance of rail as the prime mover to centralised distribution hubs.

The government says it supports the development of an expanded network of Strategic Rail Freight Interchanges and continues to fund grants that support the modal shift of freight to rail. “The £20 million (2021/22) for Mode Shift Revenue Support and Waterborne Freight Grant schemes supports the carriage of freight by rail and water on routes where road haulage has a financial advantage. These grants help to remove around 900,000 HGV loads off the road each year”, says the plan.

The Plan for Rail will encourage more freight onto rail from roads, reducing emissions, says the government. “We will support this by providing the right conditions for the rail freight industry to grow with better coordination, modern contracts, and new safeguards”.

The two-hundred-page document says long-term Government investment in rail can stimulate regeneration and support employment opportunities, as well as helping to meet global climate goals through projects such as electrification of existing lines. Again, while not setting a date for publication, the government says its Integrated Rail Plan (IRP) will set out how best to deliver and sequence HS2, Northern Powerhouse Rail and other major rail schemes. How quickly that leads to a ‘cleaner, greener Britain’ is also left open to further debate.