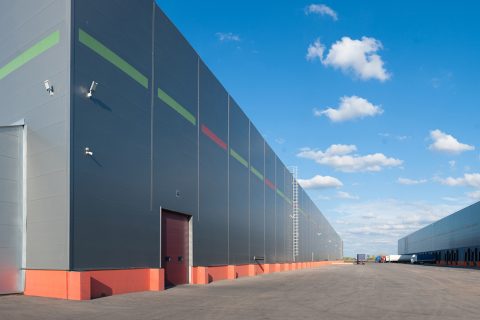 Britain’s changing economic profile has highlighted the need for much more rail-served warehousing. That’s the message from the global logistics specialists behind a portfolio of modern strategic rail freight terminals. Speaking to an audience from the industry representative body, the Rail Freight Group, Peter Frost, managing director of Kilbride Holdings delivered a presentation, outlining increasing demand and key developments in the pipeline.

Putting warehouse distribution hubs at the heart of the rail network is the key to unlocking demand for intermodal rail freight, and answering environmental demands for a lower-carbon economy. These are the headline messages from a presentation given to the Rail Freight Group, led by Peter Frost of Kilbride Holdings. Frost, who is also a executive of RFG told his audience that Strategic Rail Freight Interchanges (SRFIs) are essential for the growth of rail freight, linking retailers with warehousing and access to the rail network.

Although far from de-industrialised, Britain’s manufacturing base is far smaller than historically, and the tradition of a factory siding in every corner of the country is long gone. The model now is of a trading economy, far more dependent on distribution than manufacturing. That new pattern of demand is driving the development of a network of designated Strategic Rail Freight Interchanges (SRFIs) – purpose built to handle distributed goods, primarily in intermodal containers, but also serving growing markets in express freight and high-speed parcels.

“Rail infrastructure can often unlock significant property and logistics developments”, says Peter Frost of Kilbride Holdings. “Our strategy as a group is to put infrastructure in place to serve development. In this way the development is not only given the best chance of being a sustainable part of the region, but the infrastructure also enhances the appeal of the development. With rail freight forecast to grow by over 30 per cent in the next decade, gives us and our clients considerable opportunities.”

Great value for the taxpayer

Guy Bates, Head of Freight Development at Network Rail, is right behind the development of a network of SRFIs, and stressed the context within which the modern terminal fitted. “Network Rail support the development of SRFIs. They are great value for the taxpayer because … we don’t pay anything”, he mused. The commercially-led nature of the industry means that much of the new infrastructure required is funded privately, and off the balance sheet for Network Rail. “They are absolutely necessary to affect the modal shift that we are all desirous of”, he added. 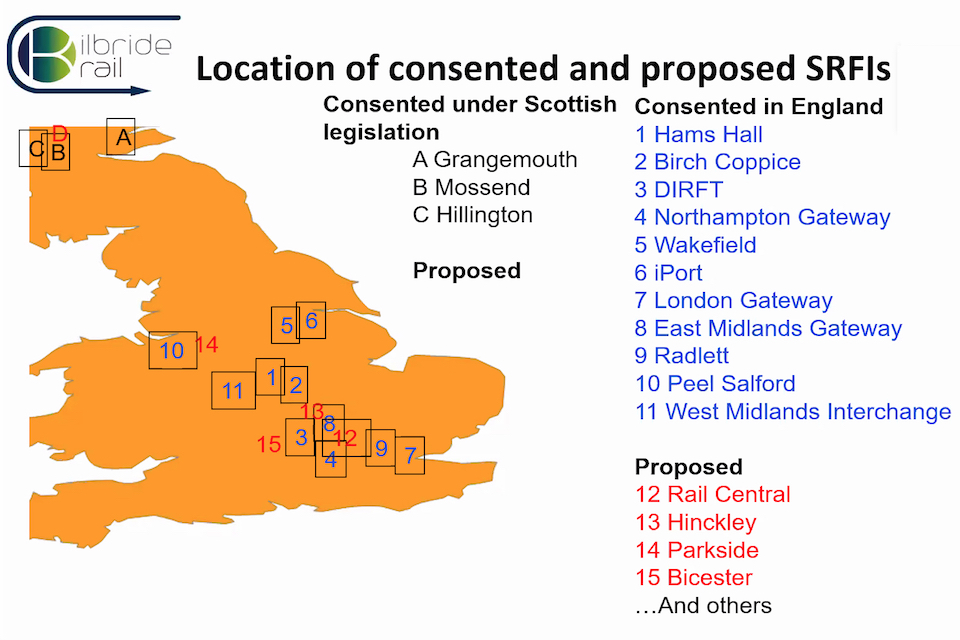 “They are freight stations in the same way as we get directly involved in developments for the bulk sector. Intermodal is the other big pillar of growth. The important thing to note for SRFI and rail-connected warehousing is that they have a role to play for the other emerging sectors that we see in rail freight – express freight and high-speed parcels. You don’t get that sort of traffic to rail unless you’ve got somewhere to put it to rail. That’s a role that SRFIs can play.”

Britain’s historical rail network suffered from a lack of planning and a competitive dash to grab the market. That often resulted in uneconomic duplication, less apparent in better planned European networks that leaned from Britain’s pioneering role. That’s not a mistake anyone is keen to repeat with the roll out of SRFIs. Peter Frost emphasises that his company is among those examining demand very closely, and the planning framework within the UK is now very much more robust than it was in the early days of rail development. As an example, he puts forward the proposals for the West Midlands Interchange, nominally known as Four Ashes.

“The West Midlands has a shortage of suitable quality development land for large scale rail linked logistics warehousing”, says Frost. “The project is being taken through a major national infrastructure planning application for warehousing and a large scale intermodal rail terminal. The rail infrastructure has GRIP3 (Governance for Railway Investment Projects) approval from Network Rail.”

The efficiency of modern rail operations makes obsolete the vast marshalling yards of the past, and the size of the SRFI of the future is dominated by the warehousing it serves.“When built, it will provide up to 743,200 square metres of new rail-served and rail-linked warehousing allowing the region’s important logistics industry to grow”, says Frost. Typically, he’s bullish about the employment prospects of the site. “The scheme will create 8,550 direct jobs boosting opportunities for people in South Staffordshire, the Black Country, the West Midlands and other surrounding areas.”

Vast warehouse complexes, served by rail will be the future face of freight operations, suggests Guy Bates of Network Rail. He says that, in time, they will generate traffic in their own right, and contribute to those expected growth figures. “Network capacity permitting, there will be traffic growth between a greater disposition of SRFIs”, he says. “Equally it’s appropriate there are some areas of the country where the SRFI model can’t work because of planning restrictions or a lack of demand for warehousing, but the advent of a rail terminal of some description, that kind of regional interchange is something we do need to look at.”