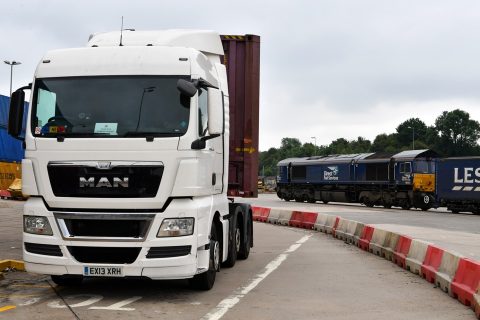 Amendments to the road toll rules: good or bad news?

A provisional agreement has been reached on the amendment of the Eurovignette Directive. This means that one more step has been taken towards a more equal playing field for rail and road transport. In practice, it will take a long time before the results of this legislative decision-taking can be seen on the ground.

15 June was an important date in the process of revising the Eurovignette Directive; the set of rules defining how road users can be charged in the form of tolls. On this day, the trialogue meeting was held, resulting in a provisional agreement after more than four years of negotiations.

The agreement includes some changes that will eventually benefit the rail freight industry, once they are actually implemented. In summary, road users will be charged more equally with the way rail users are charged for the use of railways. The Community of European Railway and Infrastructure Companies (CER) has outlined the most important changes.

Time-based charging will be phased out, and make place for distance-based charging. This means implementation of the user-pays principle, something which the CER has been advocating for many years. In this way, the wear and tear of the road will be compensated more fairly by those causing it.

However, the downside is that it will apply on certain parts of the road network. Moreover, there is an 8-year transition period. As this won’t be enforceable until very late, it prevents sustainable modes of transport such as rail from benefitting from the improved competitive conditions with road, argues the CER.

An external cost charge for pollution will be introduced on those roads where tolls are charged. This is a step forward in regards to the polluter-pays principle, another principle the CER has been lobbying for. Pollution is considered an external cost of road transport, which the road user has not been charged for so far. It is one of the external costs the industry should compensate for, according to the ‘cleaner’ rail freight industry.

However, a phase-in period of 4 years and exemptions for concessions apply. Furthermore, externalities for accident costs are not included and a specific congestion charge is only optional. Therefore, external costs of the road sector are far from being covered, the CER argues.

Although congestion charges are optional, revenues from this type of charge will be used by Member States to address the specific problem of congestion or to develop sustainable transport and mobility in general, including rail projects.

What is more, Member States are allowed to apply higher mark-ups to the infrastructure charge on specific highly congested road sections with the condition that all concerned Member States agree.

Last, the provisional deal introduces CO2 variation for infrastructure charging, to provide substantial discounts to zero-emission vehicles (e.g. electric trucks). This is less beneficial for the rail freight sector and something representatives have been arguing against.

“With the market uptake of zero-emission trucks, the competitiveness of rail will be further hampered in the long run, as electric rail freight is still subject to track access charging”, the CER explained. Or, as the UIRR earlier stated: “Although these trucks may contribute to less environmental pollution, they still add up to the external costs of road traffic. It is not that the greening of trucks should not be incentivised, but, trucks should still compensate for the external costs they make.”

Far from being there yet

According to the CER, the equal playing field that they have been striving for is therefore far from being achieved. “It must be reiterated that modal shift will only happen once the user- and polluter-pays principles are fully applied in all modes”, the EU organisation said.

“We therefore look forward to evaluating the further legislative proposals that will be put forward under the Fit for 55 package, in the hope that it could represent a positive step towards the full internalisation of CO2 emissions for all transport modes.”

The Eurovignette Directive 1999/62/EC on the charging of heavy goods vehicles for the use of certain infrastructures provides certain rules to be followed by the Member States which decide to introduce road charges (tolls or vignettes), although they are not mandatory. Together with its two updates, the regulatory framework aims at ensuring that revenues are invested in infrastructure maintenance, that discrimination on the market is prevented and that some main external costs (such as congestion, noise and air pollution) are internalised.

On 31 May 2017, within the context of the Commission’s first ‘Europe on the Move’ package, the Commission adopted the proposal for a amendment to the Directive. A long period of negotiating followed. In December 2020, under the German Presidency, the Council agreed on the latest compromise proposal. In Spring 2021, negotiations continued under the Portuguese presidency. The trialogue meeting was the last decisive moment, considered a key moment for the final agreement. Normally, the final decision occurs after the trialogue meetings and the symbolic approval of the trialogue agreements by the European Parliament.

Zero-emission truck and electric train should be charged the same