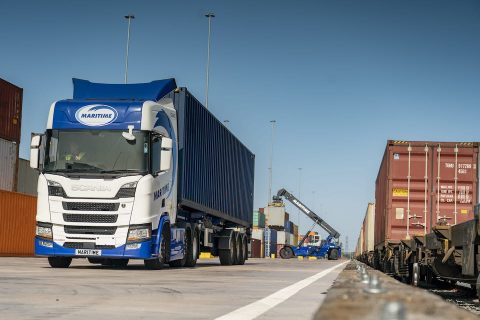 Zero-emission truck and electric train should be charged the same

European policy makers should find a way of charging for infrastructure that incentivises the greenest possible choice of modality. This requires a multimodal approach, rather than an isolated policy for a single transport sector, say the European industry associations the UIRR, CER and ERFA. Thus, no waiving tolls for electric trucks, but more incentives to take the train, is the argument of the groups.

Charging for infrastructure is the topic of a half-day conference that RailFreight.com jointly organises with the UIRR this Friday. That morning, the level playing field or lack thereof for the road and rail transport industries will be discussed with high-level speakers from the parties mentioned above and others.

The timing of the event is eminent in the wake of the Eurovignette Directive revision and upcoming legislative proposals on the ‘Fit for 55 Package’. The latter includes several revisions and initiaves linked to the European Green Deal climate actions, in particular the target of a 55 per cent net reduction. The UIRR, CER and ERFA call on the European Commission to pursue a “comprehensive and ambitious approach to internalisation of external costs during these political negotiations”.

The internalisation of external costs is an often used political term to indicate the compensation within a transport sector for the external costs made. These external costs are for example noise, air pollution, congestion and accidents. Although the topic has been on the agenda for many years, very little has been achieved, the parties say. According to them, the principles have not been equally implemented in all transport sectors, which results in an unequal playing field.

The current political debate on substantially reducing tolls for zero- and low-emission trucks under the Eurovignette Directive is a perfect example of this. Although these trucks may contribute to less environmental pollution, they still add up to the external costs of road traffic, without sufficiently compensating for it.

“Reducing or even waiving tolls beyond accounting for lower CO2 emissions could further hamper rail’s competitiveness versus road freight and lead to a reverse modal shift of up to 50 per cent in the 2030-2050 period – contradicting the objective of the EU Mobility Strategy of increasing rail freight traffic”, the parties say in their plea to the European Commission.

It is not that the greening of trucks should not be incentivised, they continue. But, as electric trains still cover track access charges of railways, trucks should still compensate for the external costs they make as well. Or in the words of the UIRR, CER and ERFA: “The key principle of the Eurovignette Directive should be that zero- and low-emission trucks shall comply both with the user-pays principle (charging for infrastructure use) and with the polluter-pays principle (in this case the remaining non-CO2 external costs.”

Just in which way can these charges contributed by the corresponding sectors be compared? This is another topic for discussion during the webinar on Friday. Currently, there is plenty of room for improvement, the associations say. “The Commission should work with the Member States and other relevant authorities such as the European Environment Agency (EEA) and Eurostat to compile and present reports regarding the progress
made towards achieving a level regulatory playing field.”

They argue for detailed tolling-related reporting as part of the Eurovignette Directive, in addition to the Rail Market Monitoring Report (RMMS). “This should allow policy makers to make informed decisions on possible competition distortion created through infrastructure charging strategies.”

Registration is free of charge and can be done here.