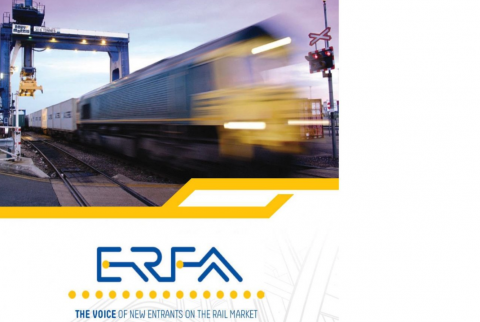 The European Rail Freight Association’s (ERFA) new President, Lindsay Durham, says there is a need to focus on the ‘prize’ of increasing rail’s market share and the benefits to society and the wider economy this will bring. She was speaking at ERFA’s Annual Event, aimed at taking the steps needed to deliver further liberalisation of the network following the finalisation of the 4th Rail Package.

She said she also supported ‘more collaborative action’ between freight and passenger new entrants, to accelerate the pressure for much-needed change in the rail sector. This new entrant appetite for growth and innovation is, she believes, needed to keep rail ‘ahead of the game’.

The event marked the official unveiling of both Ms Durham, of Freightliner Group, as President, and Markus Vaerst as Vice-Chair. He is the owner of Railmind, a Swiss-based rail freight consultancy. ERFA said he was dedicated to making rail travel ‘more cost-effective and interoperable across Europe’.

A group of high-level speakers made presentations on different aspects of the rail market affecting the freight sector. These included Duncan Clark, Strategic Development Director for GB Railfreight. He said that ensuring a non-discriminatory and transparent access to the essential facility infrastructures such as terminals, depots and stations was ‘crucial’ in boosting competition and market share.

Gert-Jan Koopman, the European Commission’s Deputy Director General for State Aid at DG Competition, said despite successive rounds of liberalisation, state-owned incumbents continued to largely dominate the market, while new entrants struggled to set up new services and routes to the European market. “If rail wants to play a leading role in the EU’s sustainable transport vision, basic competition problems in the sector should be tackled urgently,” he added.

ERFA previously described the 4th Railway Package, which aims to improve the competitiveness of the rail sector and quality of services by removing administrative costs and ensuring a level playing field for operators, including freight, as a ‘missed opportunity’. The legislative process ended in December when the European Parliament ratified the package.

Mrs Durham pointed to track access charges as representing the single largest cost for rail freight operators: “In many European countries high track access charges put rail freight at a disadvantage to road freight. Efficient and consistent rail access pricing, taking other modes of transport into account, is needed in order to avoid price distortions that undermine the competitiveness of the sector,” she added.

ERFA said successive rounds of EU rail reform had continued to leave scope for former rail monopolies to stifle competition and innovation, with newcomers often frustrated in their efforts to set up new routes and offer new types of services. It is not only customers that are losing out, it added, but society as a whole, with rail failing to increase its modal share and fulfil its central role in cutting CO2 emissions and reducing congestion.

Vice Chair Markus Vaerst has over 25 years of experience of providing high quality rail consultancy services across the public and private sectors, and has initiated and led numerous studies and reports for key international assocations representing the rail freight industry. As the owner of Railmind, he is currently championing key freight issues such as liberalisation, safety, interoperability and noise.

The event was also an opportunity to thank outgoing President Irmtraut Tonndorf, and welcome one new board member, Andreas Mandl, Managing Director of LTE Transport and Logistics.