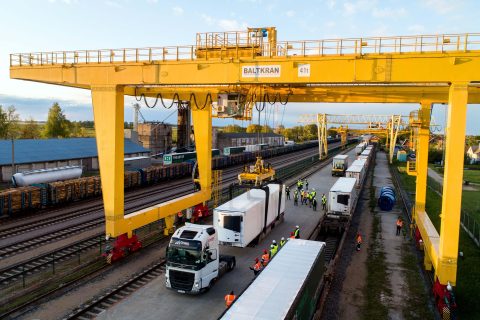 LTG Cargo will launch a new intermodal rail freight route connecting Kaunas Intermodal Terminal (KIT) with Duisburg. The service will commence on 4 April and will offer three weekly roundtrips. Semi-trailers and containers with various goods are welcome to onboard the train.

“Currently, we are actively working to offer the market as many connections with the West as possible. Upon reaching the Duisburg intermodal terminal, customers will have the opportunity to continue transporting semi-trailers and containers by train to other terminals. There are regular direct trains from Duisburg to terminals in Germany, Italy, Poland, Belgium, the Netherlands and Sweden. In addition, connections with France or Great Britain are possible”, said Eglė Šimė, general manager of LTG Cargo.

In early March, LTG Cargo also launched a train service connecting KIT with Małaszewicze in Poland in response to the needs of customers to transport cargo by rail to the East Poland region.

First international route to the West

The service is the first connection between KIT and Duisburg, but it is also LTG Cargo’s first rail freight link towards western Europe. The Lithuanian company will take care of transport in all three countries involved in the service, with shipments in Poland and Germany undertaken by LTG Cargo Polska, LTG Cargo’s Polish subsidiary.

Before reaching Duisburg, the service will transit through various hubs, including Białystok, Warsaw and Poznan in Poland, while its capacity will be up to 36 units of semi-trailers and containers per trip. “In the coming months, LTG Cargo also plans to establish cooperation with new customers in Poland and look for ways to help Lithuanian businesses import raw materials from Central European countries”, concluded the company.