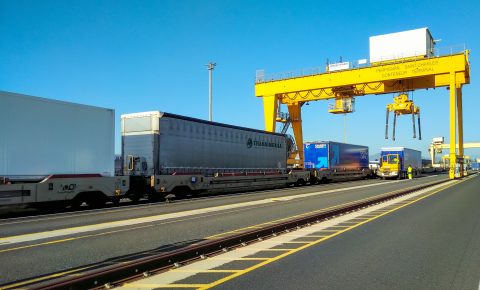 CargoBeamer keeps connecting the dots in its network

The logistics provider CargoBeamer has another rail freight connection in the pipeline. This time, it will connect its German hub in Kaldenkirchen with Perpignan, an important junction on the French-Spanish border. The new service will commence on 10 January 2022 and offer three weekly roundtrips.

The service will maintain the same profile as other services offered by CargoBeamer. It will be suitable for all kinds of semitrailers, containers, P400 trailers, refrigerated and tank trailers. For this route, CargoBeamer will cooperate with Db Cargo France, which will provide traction for the service. It is also important to mention that this connection is the sixth in CargoBeamer’s network. Five of them were added to its network during the last few months.

The three-weekly roundtrips plan will only last for one month. The company already has plans to increase the service’s frequency in mid-February. From this point on, trains between Kaldenkirchen and Perpignan will run five times per week in both directions.

The latest move from CargoBeamer is indicative of its attempt to boost interconnectivity between its hubs. The company opened its new terminal in Calais, France, a few months ago, and since then, it has kept adding new services to its network. Among them are the connections between Calais and Domodossola, Calais-Perpignan, and a link from Calais to Ashford in the UK via the Channel tunnel.

“Having already greatly expanded our network this year, we are delighted to be able to offer our customers the next attractive line from January 2022. With the expansion of the service in Perpignan, we serve the southern French market and position ourselves in the direction of northern Spain with the strong transport region around Barcelona. Furthermore, the addition of another route is also an important step forward for the location of Kaldenkirchen, where we plan to start constructing our own transhipment terminal soon,” highlighted Matthias Schadler, managing director of CargoBeamer intermodal operations.