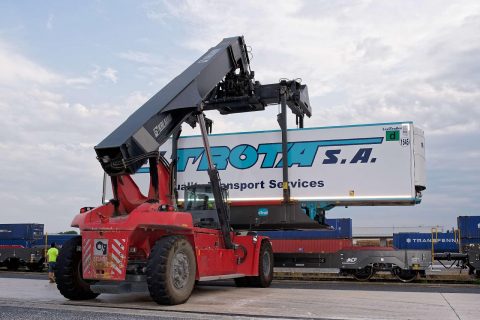 The Calais-Perpignan intermodal route in France officially started its operations. The new service is available since 10 July with four roundtrips per week and the potential to add more in the future. On 16 July, the first train departed from Calais and reached Perpignan the day after. Unloading and reloading procedures took place immediately, and the train was on its way back on 18 July.

The Calais-Perpignan route is one of the three routes CargoBeamer uses currently. The other two are between Kaldenkirchen (Germany)-Domodossola (Italy) and Duisburg (Germany)-Poznan (Poland). During Q4 2021, the German company wants to connect Calais with Domodossola, while in 2022, it aims to link Kaldenkirchen with Perpignan and Calais with Poznan.

The latest service in France is suitable for cranable and non-cranable semi-trailers. As Hans-Jurgen Weidemann, CEO of CargoBeamer underlined, “80% of the trailers in France are non-cranable. Therefore, we have developed a revolutionary system for these trailers, which took us three years to design and three years to approve. This type of wagon is already operating successfully on the German and Italian rail networks, but this is the first time it has been used on a French route”.

Cargobeamer opened its first terminal in Calais on Wednesday, 16 June. The terminal enables the loading of non-cranable semi-trailers on the train. The terminal is the first of Cargobeamer that runs entirely on its own technical loading concept. This concept allows semi-trailers of all types to be lifted on a train. Cargobeamer already applies the technology outside of its own terminal. But by having its own terminal, the process becomes more efficient. It can handle 6 to 12 trains per day, in a much faster way than with conventional loading techniques, explained Hans-Jürgen Weidemann during RailFreight’s Networking Days event last June.

The company has big plans for its new terminal. It aims to transform it into an international logistics platform linking various European terminals and boosting multimodal traffic between Britain and southern or eastern Europe. “This first link between Calais and Perpignan is an important step towards the creation of a European network of multimodal CargoBeamer trains, which we have been working on for years”, mentioned Nicolas Albrecht Chief Business Development Officer and member of the three-person CargoBeamer board.