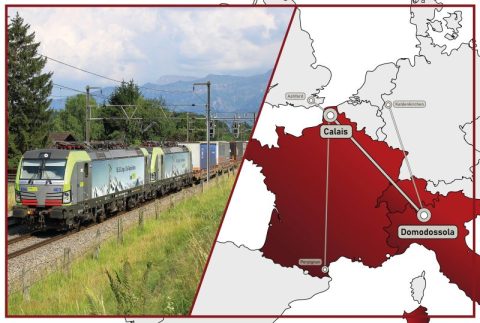 This December: all trailer types on the Calais-Domodossola train

A little later than planned, but on 13 December Cargobeamer will start operating its Calais-Domodossola line. “For the start, we plan to operate four weekly trains in each direction, with a frequency-upgrade to six rotations in early 2022”, the intermodal company said.

The service connects the respective hubs in France and Italy in 27 hours transit time. It is available for all types of units: cranable and non-cranable semi-trailers, containers, dangerous goods, P400s, controlled temperature trailers and bulk wagons.

In Calais, Cargobeamer runs its own terminal from 16 June 2021. This is the first that runs entirely on its own technical loading concept. This concept enables semi-trailers of all types to be lifted on a train. Cargobeamer already applied the technology outside of its own terminal. But by having its own terminal, the process became more efficient. The company is preparing to set up a similar terminal in Domodossola and Kaldenkirchen.

Since the opening of the terminal in Calais, several new services have been launched from the French portal city. On 16 July, the route between Calais-Perpignan in France was launched. In September, this route was extended with a link to the UK via the Channel Tunnel. It also wants to link it with Poznan in Poland.