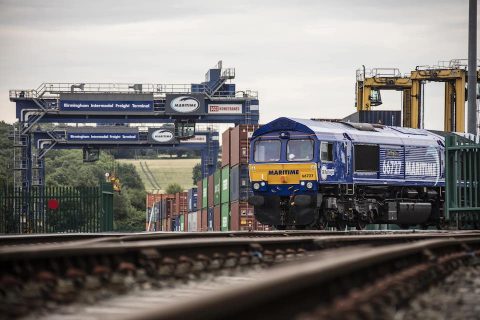 Maritime Transport’s rail fleet will be making a regular visit to east London as of this week. The company, which partners with rail freight operator GBRf, has commenced a six-days a week flow between their Midlands base at Birmingham Intermodal Freight Terminal, and the DP World deep-water facility at London Gateway, part of the recently designated Thames Freeport.

The new flow, connecting manufacturing in the West Midlands with international markets via London, will, according to Maritime, deliver freight users a secure, direct link between consumers and manufacturers in the West Midlands and south of England. The service runs six days a week from Monday to Saturday, with a total transport capacity of 87 TEU in each direction.

Maritime-branded trains, operated by GBRf are now running intermodal services into Maritime’s rail terminals in Manchester, Wakefield, East Midlands Gateway, and BIFT. “The commencement of a new daily connection will result in a considerable reduction in CO2 emissions, saving over 4,000,000 road miles per year in an increasingly-congested road network”, says a joint statement from the partners.

The terminal at Tamworth has been under the ownership of Maritime for seven years. The acquisition of Roadways Container Logistics in 2014 saw Maritime acquire BIFT as part of the deal. “Container throughput at the terminal has increased significantly over the years due to additional services, continued investment in state-of-the-art container handling equipment, and vastly-improved turnaround times”, say Maritime. “Businesses across the country directly benefit from five daily intermodal services at BIFT, connecting London Gateway, Southampton and Felixstowe to the Midlands. Latest investments at the facility include major civil works, crane refurbishments, and two new ESC450 straddle carriers supplied by Kalmar Ltd.”

A team of thirty staff service the intermodal operations, headed by John Bailey, the managing director – Intermodal and Terminals, Maritime Transport. “This new service is an important milestone in the expansion of our intermodal offering, and reflects our passion and commitment to opening up new routes to our intermodal customers with fast, reliable, and cost-effective end-to-end solutions”, he said. “As we see high demand for regular intermodal services from BIFT to the major ports in the south, we look forward to working alongside GBRf and DP World London Gateway together with a service that offers enormous potential.”

London Gateway, which is under the global portfolio of DP World, was recently awarded freeport status by the UK government, giving the facility advantageous terms under which to attract new business. The bid was made in a joint effort with Forth Ports, who operate neighbouring Tilbury. The River Thames facilities have subsequently been promoted jointly as Freeport Thames.

This new service is not the first from Maritime to visit the port. John Trenchard, UK commercial and supply chain director at DP World London Gateway has been counting the containers for some time. “Maritime’s third service into DP World’s smart logistics hub at London Gateway will enable more customers to benefit from fast, reliable, and flexible links to international supply chains and markets”, he said. “We are uniquely-placed to provide the right trading infrastructure and smart logistical solutions for our customers, and are delighted to see Maritime expanding its intermodal service provision from its industry-leading terminal in Tamworth, which complements our own state-of-the-art terminal operations.”

For his part, John Smith, the managing director of GB Railfreight, was typically pleased, and took some modest credit for furthering the long-standing partnership with Maritime. “Together with the seven intermodal services we already operate for Maritime Transport, the extra capacity created by the BIFT to London Gateway flow reinforces the vital role rail freight is playing in delivering goods sustainably around the country”, he said.

Maritime Transport is celebrating its twentieth anniversary year in 2021. Although launched as a road haulier, the company is now among the largest, privately-owned intermodal transport operators in the UK. The rail subdivision, Maritime Intermodal, is a relative newcomer, having been launched in 2019. The company currently operates daily intermodal services running throughout the UK.