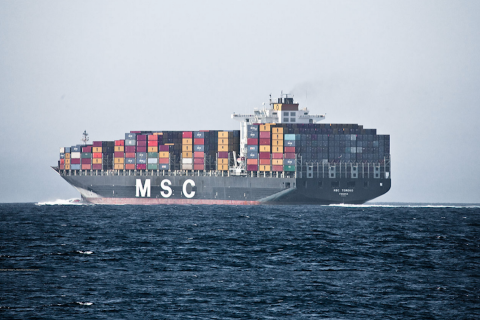 UK rail freight operator GBRf and European shipping line MSC have agreed a new five-year deal to keep intermodal traffic flowing between British ports and distribution centres. The land and sea collaborators have just extended their long-standing agreement to move containers from Felixstowe and London Gateway to both the Midlands and Yorkshire, with a minimum operational commitment of five days a week. Both companies played up the victory for sustainability.

Intermodal traffic has been secured for another five years, in a deal signed between Britain’s GB Railfreight (GBRf) and Mediterranean Shipping Company (MSC). The two operators have been in partnership since 2002, so the five year extension to their mutual contract came as no surprise to industry watchers. It does however commit the land and sea partners to a new level of service agreement, and brings forward the prospect of even lower carbon logistics for their customers around the globe.

Back at the turn of the century, when GBRf and MSC first teamed up to deliver intermodal traffic to and from Britain’s ports, the headlines were all about commercial advantage. Today, the renewal of the 19-year old partnership places the emphasis very much more on sustainability and the low-carbon delivery aspects of the service.

The new agreement is welcomed by both companies for its environmental advantages. That’s something which has gone down well with stakeholders at each headquarters, and shareholders on the London and Geneva exchanges.

GBRf has been a provider of rail services to MSC since 2002. A joint statement on the renewed deal says that their combined knowledge and expertise will help enable the two companies to deliver what they call “market leading door-to-door services to their customers”.

The new agreement will be volume-based. GBRf expect that clause to increase wagon utilisation – rather like occupancy rates at a hotel. They say that will help further reduce carbon emissions. For their part, MSC is hardly short of capacity to drive intermodal freight wagon occupancy. The shipping line currently operates a fleet of over 470 container vessels, and can convey almost two and a half million TEU at any one time. On land, GBRf operates a rolling stock fleet of some 1500 wagons, including their intermodal platform formations, currently deployed to connect London and Felixstowe with Daventry, Birmingham, Manchester, Selby and Doncaster.

“MSC confirm a new five year deal with GBRf who have been supporting MSC with our Intermodal rail services since 2002”, said a company statement. “Our priority was to continue to offer unparalleled capability and flexibility to our line haulage customers in a fast paced and ever evolving UK intermodal market. Increased wagon utilisation was a key component from the start and engagement with ports and inland terminals to support this initiative took place early on.”

“We are thrilled to have signed this contract with MSC”, said John Smith, GBRf cheif executive. “They are a longstanding partner and one of the leading shipping and logistics companies in the world. Given MSC’s projected future growth we have struck a flexible agreement which will allow both parties to make better use of the services we share. The rail freight market is in good shape and will be needed more than ever as we begin the road back to recovery.”

The services will operate from Felixstowe and London Gateway to both the Midlands and Yorkshire , with a minimum commitment of five days a week.