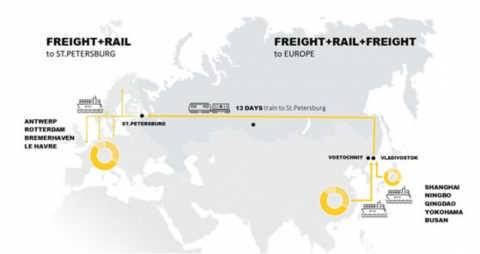 MSC has launched a new intermodal service between Europe and Asia combining rail and sea freight. The service was launched on Monday 12 April. It departs from China, Korea and Japan to Europe via the Russian ports of Vladivostok and Vostochniy.

The train journey covers the largest distance, travelling the long overland route along the Trans-Siberian corridor. In 13 days, the trains move from the Russian ports on the east coast, to the Russian port of St. Petersburg in the west of the country.

From St. Petersburg, cargoes can be shipped directly to some of the major European hubs such as Antwerp, Bremerhaven, Rotterdam and Le Havre through the European feeder network of MSC. The same is done in the first leg of the journey. Ships sail to the Russian ports of Vladivostok and Vostochniy from Shanghai, Ningbo and QIngdao (China) as well as Yokohama (Japan) and Busan (South Korea).

According to the shipping company, this results in transit times between 30-45 days between Europe and Asia.