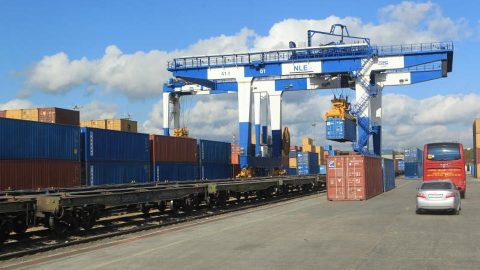 Shift to rail for motor oil in Russia

Russian Railways has managed to attract a new type of freight on tracks. The company transported the first batch of motor oil that was loaded in containers. It also plans to make such shipments regular and is considering some improvements in this service.

While scheduled container trains are gaining popularity in Russia, local logistics companies also try to combine them with single wagon loading services. This allows Russian Railways (RZD) to organise small shipments. Among the latest developments is the first three-wagon bunch of motor oil delivered by rail from Sarepta, a freight station in Volgograd, to Novorossiysk, an important Black Sea port.

The delivery, which consisted of only six 20-foot containers, was organised by RZD Logistics, the dedicated subsidiary of Russian Railways, and Ruscon, the logistics provider of Delo Group. In order to make this connection regular, RZD Logistics is planning to apply flexi-tanks for the return deliveries (from Novorossiysk to Volgograd).

RZD carried out the shipment within its Freight Shuttle service. It is a new opportunity for shippers that was launched at the end of May. This service is dedicated to the delivery of small shipments, it is also connected to another company’s service known as the Freight Express. “The new approach provides the consolidation of small shipments from different stations (Freight Shuttles) into a separate train (Freight Express), its accelerated movement in accordance with a special schedule to a major transport hub and further “spraying” (by Shuttles) to the final destinations”, RZD Logistics explains the features of the service.

Currently, the company is focused on the development of the Freight Shuttle links by using its Freight Express route between Moscow and Novosibirsk. The other lines are also under consideration. As for the most likely new locations for Freight Shuttles, RZD Logistics is regarding the following locations: Saint Petersburg, Nizhny Novgorod, Yekaterinburg and Samara. It is worth to add that 115 single wagons loaded with various types of freight were transported within the Freight Shuttle service since its launch two months and a half ago.