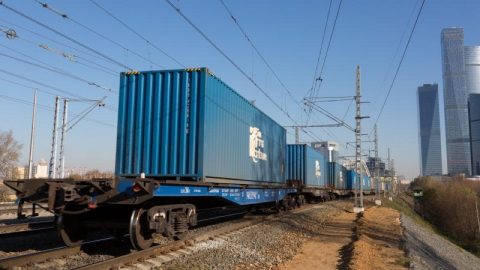 Electronics, car parts or fast-moving consumer goods have already become common good on container trains between China and Russia. In order to increase and improve rail freight traffic between the countries, logistics companies are looking for new opportunities. And they may have found these in the containerisation of bulk and liquid freight.

Among the latest developments is container train launched from the Russian station of Barnaul in the Altai Krai to the Chinese gateway of Alashankou on the border with Kazakhstan. Eighty tank containers were loaded with rapeseed oil. The train runs via Kazakhstan and the Dostyk border crossing. Only three days are needed to travel the distance between the termini. This connection was arranged by Russian Railways (RZD) and TransContainer.

In late September of 2019, a multimodal rail-sea service departed from Russia to China. The railway leg stretched from Barnaul to the port of Nakhodka in the Russian Far East. It included containers loaded with gunny sacks filled with linseeds and flexi-tanks filled with linseed oil. In the Russian port they were transshipped to vessels for delivery to the Chinese ports of Shanghai and Tianjin.

The overall weight of this shipment was over 2,000 tonnes. Its key feature was the usage of flexi-tanks: 60 of 106 containers were loaded with these special single-use bags for transporting liquid goods by rail. The flexi-tanks have a capacity for 10,000 – 24,000 litres or 20 – 25 tonnes of liquid freight. They are placed in the 20-foot containers.

Such mode of transportation is more reliable and convenient compared to tank wagons and barrels. For the Barnaul – Nakhodka – China service, each flexi-tank was loaded with 21.5 tonnes of linseed oil. The remaining 46 containers were used for the bulk commodity: the linseeds into gunny sacks.

Containerisation is gradually gaining popularity in the transport of bulk. Thus, in late February 2020, TransContainer and RZD launched a container train with uncommon freight: 62 40-foot containers were loaded with zinc-lead concentrate. They were delivered from Noyon-Tologoy ore deposit in Zabaikalsky Krai of Russia to the Chinese city of Chengdu.

TransContainer plans to make this service regular with a frequency of two times per months. Earlier, zinc-lead concentrate had been transported only in open wagons, and the transshipment operations on the border between the countries were time-consuming compared to the transport of containers.

The other potential for bulk containerisation lies in agriculture. Here, the example is followed of the linseeds filled in gunny sacks and loaded in containers instead of using covered or hopper wagons. There are several novelties in this area, and soybeans are among them. At the end of 2019, RZD Logistics, a subsidiary of Russian Railways, delivered 250 tonnes of this agricultural product from Russia to China. The soybeans were filled into gunny sacks that were then stuffed into 20-foot containers.

The container train of 10 containers departed from Anisovka station, an important freight junction close to the Russian city of Saratov, and in seven days arrived at Alashankou station in the Xinjiang Uygur Autonomous Region of China. This delivery was organised for COFCO Group that operates its own enterprise, 30 kilometres from Alashankou. RZD Logistics performed the shipment as Agroexpress, its specialised service dedicated to the transportation of agricultural products.