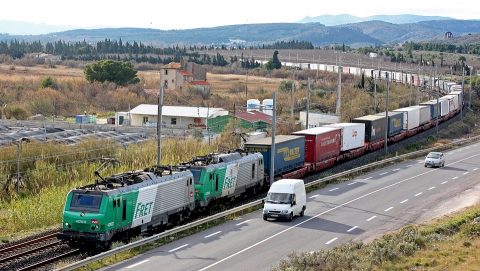 Published on 30-07-2020 at 19:00
Lorries on rolling highway between Bettembourg and Le Boulou, source: VIIA

The Government of France is considering three new routes for rolling highways across the country. They will be launched by the year’s end. Some of the planned rail freight connections could be extended to the neighbouring states. In order to implement the projects, the Cabinet will allocate up to 35 million euros.

“Combined transport is the future,” Prime Minister of France Jean Castex declared during his visit to the intermodal terminal in Bonneuil-sur-Marne, the Val-de-Marne department earlier this week. That’s why his Cabinet is planning three new routes for rolling highways: from Bayonne to Cherbourg, from Sète to Calais and from Perpignan to Rungis.

As Mr Castex noted, the third route is most likely to be extended to the neighbouring states. Instead of Perpignan and Rungis, it could have the other termini – Antwerp in Belgium and Barcelona in Spain. With the help of these three new rolling highways, the Government of France plans to remove at least 20,000 lorries a year from the country’s roads and, therefore, to reduce CO2 emissions by 425,000 tonnes each year.

All the mentioned rolling highways are operated by VIIA, a dedicated subsidiary of SNCF Logistics. The length of these connections varies from 175 kilometres for the Aiton – Turin Orbassano route to 1,200 kilometres for the Le Boulou – Calais route. Each rolling highway is served by the 850-metre-long combined trains. Some routes such as those that start/end in Calais or Sète are linked with ferry services to the United Kingdom and Turkey respectively. As a result, the customers are able to book the multimodal services to transport their freight.