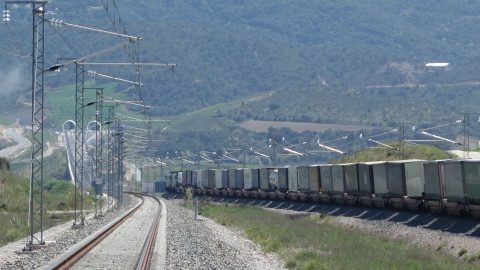 Renfe Mercancias and SNCF-owned rail freight company Viia have started a piggyback service between Barcelona and Bettembourg in Luxembourg. The first train departed on 20 February. It is for the first time that this type of loading unit is admitted on the Spanish network.

The piggyback trains start in Can Tunis station in Barcelona, and travel 1,200 kilometres to the hub in Luxembourg. There are five trains per week, although both companies expect to increase this to six departures from April onwards.

Trains will cross the tunnel of Le Perthus, on the border between Spain and France to connect with the French city of Le Boulou. Before the launch of this service, trains were bound to transfer to a different train or a track to enter the French railway network. Semitrailer services to Spain did not exist until now.

Renfe’s locomotives pull the wagons and lorries until Perpignan, where SNCF’s locomotives will continue until Bettembourg. Here, trucks will take the lorries to their final location. By combining train and truck, the companies comply with EU rules on driving time. Moreover, they have brought back labour costs.

The service transports semi-trailers and traditional cargo wagons, handling 1,500 tonnes per train. Renfe and Viia estimate that this service may take around 20 thousand lorries off the road per year, cutting 20 thousand tonnes of CO2 emissions.

Viia offers several railway services in Europe, such as between Aiton (France) and Orbassano (Italy); but also between Le Boulou (France) and Luxembourg, to which the new service to Barcelona was linked. The rail freight company also connects Le Boulou and Calais, where trains are linked with the Viia-operated ferries to the UK.

These last two services connect Spain with Central Europe and the UK, both offering an interesting service for fresh vegetable and fruit supply, which may suffer a serious disruption in case of a no-deal Brexit.

The access of semitrailers on the Spanish market is considered a milestone for intermodal transport. As the city of Barcelona was linked to the French railway network, another service connecting to Antwerp was launched by intermodal operator Hupac.

In the meantime, the Belgian port of Ghent has established the missing rail freight link which connects the port to Bettembourg. “From 11 March 2019 onwards, trains with trailers and containers from customers throughout Spain, Southern France, Italy and Turkey will arrive at the DFDS terminal in Ghent”, the port authority said.

In Ghent, trailers can be transferred onto freight ferries for sea transport to Gothenburg in Sweden, thus connecting the European hinterland to the Scandinavian countries. Barcelona and Le Boulou are important hubs in this hinterland.