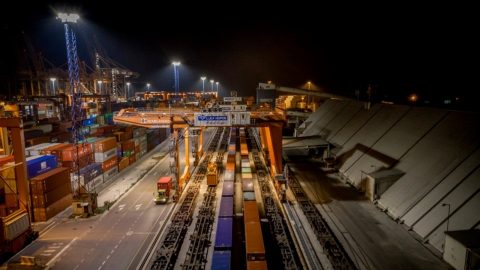 A new freight train has been launched between the Slovenian Port of Koper and the Slovakian capital of Bratislava. It is the third rail service from Koper to Bratislava and the seventh one to Slovakia in general. The new link was organised by Rail Cargo Operator, ÖBB’s freight subsidiary, and Adria Kombi, the Slovenia-based intermodal operator.

The new Koper – Bratislava rail service started on 14 January with a train departure from Koper early in the morning. According to the schedule, this train runs between the termini twice a week. From the Port of Koper, it departs on Tuesdays (at 06:10) and Fridays (at 15:00). Meanwhile, the train leaves Bratislava on Mondays (02:45) and Thursdays (02:45). The average travel time is around 20 hours.

Rail Cargo Operator and Adria Kombi launched the new link for transporting containers and lorries. The new service could be combined with other connections of Rail Cargo Group. As a result, customers are able to use it for carrying freight from Koper to Czechia, Hungary and Poland via Bratislava.

Slovakia is the third-largest foreign market for the Port of Koper after Austria and Hungary. The country mostly sees two types of freight transported via Koper – containers and cars. As of today, there are seven rail services from the Slovenian seaport and Slovakia: three links to Bratislava (including the new one), three links to Žilina and one link to Dunajská Streda. Most of the connections are provided by Czech logistics company Metrans or Adria Kombi in a partnership with Rail Cargo Operator.

The most frequent service, 14 times per week, runs between Koper and Dunajská Streda where Metrans operates an important intermodal terminal. The Czech company also offers services to Bratislava (one time per week) and Žilina (three times per week). Moreover, another Czech company Raillex operates the sole train from Koper to Žilina running once a week. At the same time, Adria Kombi and Rail Cargo Operator (RCG) provide the rail freight links to Žilina six times per week. They also offer services to Bratislava: four times a week to RCG’s Container Terminal and two times a week to the Bratislava Central Freight station.