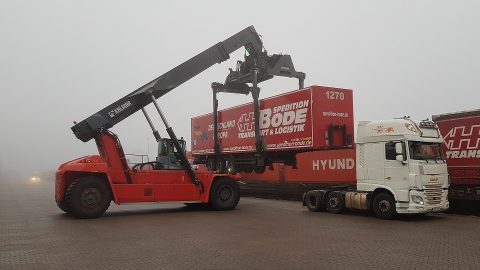 Sweden will get a new regular rail-ferry-rail connection to the German intermodal hub of Duisburg. Two railway legs will be arranged by DB Cargo Scandinavia, Kombiverkehr and Spedition Bode while the sea leg will be performed by ferry operator TT-Line. The new service will be focused on the transportation of containers, swap bodies and semi-trailers.

The partners have scheduled the launch date of the new multimodal service for 17 February 2020. DB’s DUSS terminal in Duisburg will be the departure point for the flat wagons loaded with containers and semi-trailers. They will head to the Baltic seaport of Lübeck for boarding on ferries. To this end, Skandinavienkai ro-ro terminal (located in Travemünde but belongs to Lübeck Port Authority) will be used.

The ferries will arrive at the Swedish port of Trelleborg. Afterwards, the containers and semi-trailers will run by train to Hallsberg or Stockholm. The entire route from Duisburg to Hallsberg will take up to 36 hours. Initially, the multimodal links will depart from the termini three times a week. Afterwards, the frequency will likely be increased.

By using the Kombiverkehr network of rail freight connections, the customers will be able to ship their freight to other locations. Containers from Sweden could be also delivered to Ludwigshafen, Hamburg, Lyon, Rotterdam and Antwerp. The freight heading northward could reach Norway (Oslo) or various destinations in Northern Sweden (Sundsvall, Umeå, Luleå). Taking into account the ferry connections of TT-Line, containers and semi-trailers could be transported to other Baltic seaports: Rostock in Germany, Świnoujście in Poland and Klaipeda in Lithuania.