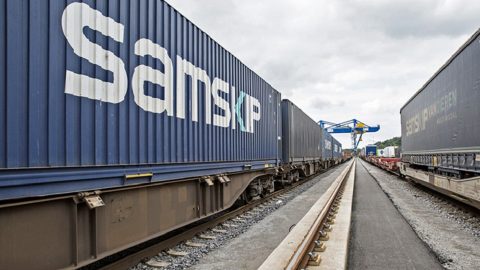 Dutch logistics provider Samskip has launched the Coevorden-Nässjö rail freight connection. It is the first link between the Netherlands and Sweden in the company’s network. The rail service will be provided five times per week in partnership with Hector Rail, Skane Rail and Euroterminal Coevorden.

Both termini of the new connection create good opportunities to provide multimodal services. Coevorden is located in the Dutch province of Drenthe close to the German border. At the same time, Nässjö is an important railway junction in southern Sweden.

“It gives shippers and receivers in the northern Netherlands easy access to rail services into Nässjo, where rail lines pointing in six directions meet, and therefore into the rest of Sweden and parts of Scandinavia,” said Remco Leijgraaff, Samskip Sales Manager Rail Network.

Over the last three years Samskip has been expanding its network in the Sweden-Netherlands-Germany triangle focusing on the transportation of hygiene products, automotive parts and electronics. Earlier this month, the Dutch company launched a four-times weekly rail freight service between Duisburg in Germany and Falköping in Sweden.

The new Coevorden-Nässjö connection allows Samskip to provide more and better services in this triangle. “Coevorden creates the opportunity for expansion for the Duisburg–Nässjö shuttle and for intermodal loads moving south and east to/from Duisburg,” noted Gert-Jan Meijer, Samskip Trade Manager Sweden. Also, Coevorden is fully set up to support fast turnaround terminal-terminal and door-door transport options for ISO containers including 45-feet high cubes and mega-trailers of up to 13.6 metres in length.