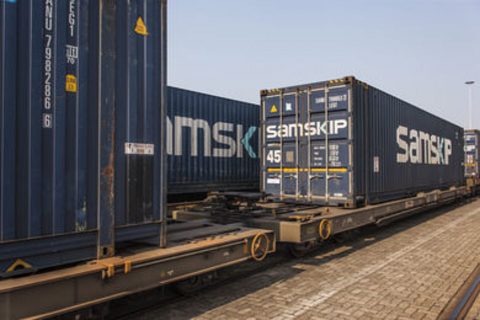 Samskip has launched a new four-times weekly rail shuttle link between the German hub of Duisburg and Falköping in Sweden. The new service connects Sweden’s southern industrial heartland with the rest of Europe.

The new service is the fourth regular rail service operated by Samskip between Duisburg and Sweden. Between 19 and 21 trains connect the two countries per week. The service will be coordinated through Samskip’s rail centre in the Dutch Genemuiden and supported through its local team in Åhus in Sweden.

Under the terms of a new haulage agreement with Hector Rail, the new service takes the place of direct connections between Duisburg and Göteborg although Samskip customers more local to the Swedish seaport will be supported through a dedicated link to Falköping.

“As the provider of the most extensive freight rail services connecting Sweden to Europe’s mainland, we are adjusting our network to reflect growing demand inland, at a time when new shortsea capacity concentrated at Göteborg is chasing ever scarce drivers for trailer services”, said Gert-Jan Meijer, Samskip Trade Manager Sweden. “We are enhancing reliability for inland industrial customers around Falköping and bringing loads closer to them for final delivery miles by road, also offering crossdocking services out of the terminal with immediate effect.”

Meijer highlighted the sustainable nature of the multimodal option, which will cut CO2 emissions by a minimum of 50 per cent over its road service counterpart. Swedish exporters whose nearest unitised train connection was at Falköping could also be newly assured of their full eligibility to take advantage of multimodal payload advantages available under EU law, he said.

The Duisburg connection provides a gateway to Samskip’s service network to Southern Europe, including Italy, Spain, Portugal and Turkey, with growth in volumes especially strong into northern and southern Germany over the last year according to Meijer. The German port also offers opportunities in the UK and Irish markets via Samskip’s shortsea hub in Rotterdam.

By contrast, overland rail services between continental Europe and Göteborg had been faced by a sharp injection of ro-ro capacity connecting to Benelux ports in the last 24 months, at a time when the port’s own rail facilities had been centralised away from the docks area.

“Falköping is ideally located for growing demand to move automotive parts into the Netherlands and Germany,” added Remco Leijgraaff, Samskip Sales Manager Rail Network. “Samskip has already responded to this trend with significant investments in 3m internal height ‘mega’ trailers over the last 18 months. The potential is also there to develop 40ft ISO container transits between Sweden and China via daily services connecting at Duisburg to the ‘New Silk Road’. Overall, we think Falköping is going to attract a different type of customer to the multimodal option.”