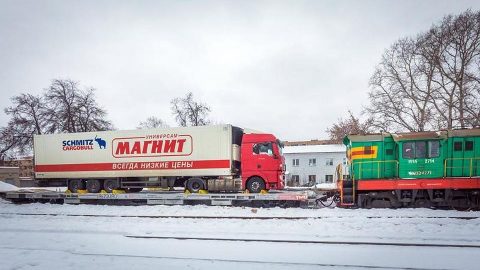 Federal Freight, a subsidiary of Russian Railways, has launched its first regular Ro-La service. The piggyback train runs once per week on the Novosibirsk-Moscow-Novosibirsk route. Now, the company is exploring opportunities for increasing the frequency to daily runs and adding new directions.

The first train departed from Novosibirsk’s freight terminal Kleshchikha on 25 December. It arrived at the Orekhovo-Zuyevo terminal in Moscow region on 29 December. The travel time was 3.5 days. The first set consisted of only one piggyback flatcar loaded with one truck of Russia’s largest food retailer Magnit. The basic tariff for piggyback transportation on the 3,113-kilometre route is 178,000 Rubles (2,234 Euros) per truck.

Federal Freight considers the new service as a convenient mode to carry goods in regions with geographical or climatic restrictions for trucks, for instance, in Siberia. “Piggyback transportation will allow not only to relieve road traffic but also to reduce the impact of heavy trucks on the road infrastructure and the environment. We are confident that the new service will be in demand with both large retailers and private car owners, as it will provide significant cost savings with a comparable delivery time”, CEO of Federal Freight Viktor Voronovich noted.

Russian Railways was planning the launch of the Ro-La train since 2010. The company made several trial rides. The last one was in February on the Kaliningrad-Moscow route. The trailer on the piggyback flatcar was delivered between the terminals in 76 hours, twice as fast as by road. Also, the trial ride showed that the train ride was 30 per cent more economical. To develop the Ro-La service, Federal Freight intends to acquire 320 piggyback flatcars in 2019. Earlier, the company announced plans for the purchase of 1300 units, but the figure was corrected.