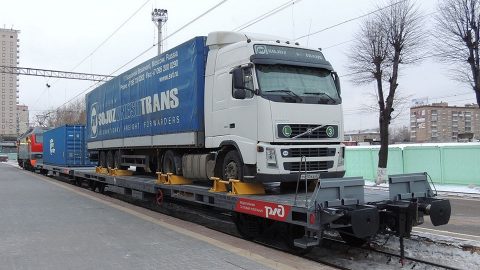 Russian Railways (RZD) is testing new piggyback depressed floor flatcars, expected to run on rails in 2019. Joint-stock company Federal Freight, subsidiary of the Russian railway company and Uralvagonzavod, a Russian manufacturer have obtained the patent for the invention.

The technical features of the invention are mostly unknown. Meanwhile, RZD noted that the new flatcar will be universal and can be used for transportation of trucks, containers and tank-containers. “Tests have shown that we have developed an absolutely competitive flatcar; it can be used for the composition of freight trains of any weight and any length on the entire 1520 mm-gauge network,” said Alexei Taicher, CEO of Federal Freight.

Federal Freight will use the new piggyback flatcars for speeding up ro-ro transportation in Russia. The company will purchase circa 1300 units by the end of 2019. The first regular ro-ro trains composed of the newly invented wagons will be launched in 2019. Initially, they will run on the Moscow – Novosibirsk – Moscow route. “The project of Federal Freight will have a positive effect on the development of the transit potential of the Eurasian Economic Space. It will provide regular traffic and accuracy in freight transportation and reduce congestion on federal highways”, reported the operator.

Federal Freight launched the project of the new piggyback flatcar in summer 2017. Earlier, the company ran several trail combined trains (ro-ro and container trains) on the Moscow – Novosibirsk – Moscow and Moscow – Yekaterinburg – Moscow routes. These wagon-sets were composed of 13-9961 piggyback flatcars designed in 2014. Federal Freight is one of the largest railway freight operators in Russia. The company provides rolling stock for transportation of goods as well as freight forwarding services. Federal Freight owns 138.5 thousand freight railcars, most of them are gondola cars (104 thousand units) while the flatcars are only 9.4 thousand units. In 2017 the company carried 197 million tonnes of cargo.