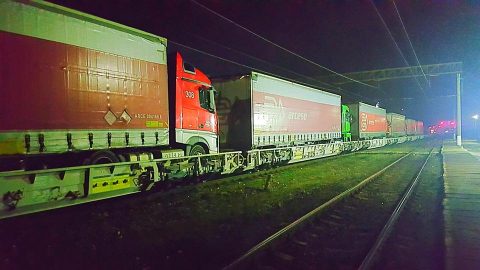 Romanian freight railway company CFR Marfa has intensified its Ro-La transportation activities. The carrier launched two trains for truck transportation this year and intends to continue these initiatives. It has invited neighbouring countries to cooperate.

CFR Marfa launched its first regular Ro-La train service end July 2018. The first train departed from Dorneşti, in northern Romania, headed for the Bulgarian border city of Ruse via Giurgiu Nord. The train carried twenty trucks from the Ukrainian to the Bulgarian border. From here, they continued their way by road to Greece and Turkey.

Currently the train service runs only to Giurgiu Nord. Romania and Bulgaria are discussing the tariffs for Ro-La transportation between the countries. Another trial line was launched in February, connecting Curtici intermodal terminal in western Romania, with the Craiova railway junction in the south west of the country via Simeria and Petrosani stations. The train transported eight trucks from the Hungarian to the Bulgarian border while the drivers travelled in a special passenger railcar. The trucks travelled over a 400-kilometre mountainous route for twelve hours.

According to CFR Marfa, the Ro-La trains is an expensive technology, and it therefore requires subsidies. The project was realised together with Environment Fund Administration of Romania, which provided 14 million Romanian Leu or more than 3 million Euros for this purpose. This amount covered approximately sixty per cent of the costs.

“We will continue negotiations on this project with interested companies in Turkey and Ukraine,countries outside the EU that need authorisation for transit through Romania and Bulgaria”, CFR Marfa reported. It is worth noting that Romanian officials had several rounds of discussions with Ukrainian counterparts about Ro-La trains.

CFR Marfa owns 160 special low-floor railcars for Ro-La transportation but only 44 of them were modernised and are used for freight operations. The adjustment of other railcars will depend on the launching of new routes. CFR Marfa evaluates its capacity for Ro-La transportation as 4 thousand trucks per year. The company operated Ro-La train between Wels (Austria) and Glogovat (close to Arad, western Romania) between 2002-2007. However, the service was discontinued when Romania entered the EU because the advantages of the Ro-La trains were devalued.