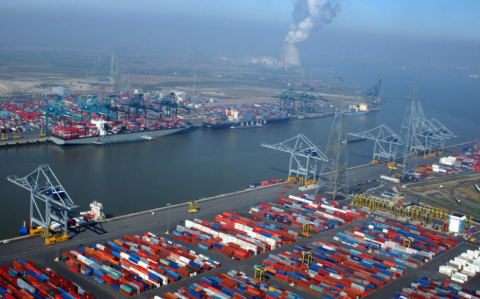 H&S Container Line is introducing an additional rail freight round trip between Andernach in Germany and the two container terminals at the Port of Antwerp’s Deurganck dock. H&S already operates on this route but is doubling the frequency to twice a week thanks to financial support from Antwerp Port Authority.

The support offered to H&S Container Line is the result of a Call for Proposals (CfP) launched in October last year by the Port Authority to attract projects for improving the rail connectivity between Antwerp and the key industrial Rhine-Ruhr and Rhine-Main regions of Germany. Several other operators also submitted projects, but not all of them met the conditions for financial support.

The Rhine-Ruhr and Rhine-Main regions are among the most heavily industrialised in Germany, and thus also the largest generators of cargo. Antwerp is the nearest port to both of them, and so it is the natural gateway to their hinterland. In 2015 a total of 64 million tonnes of freight was carried between Antwerp and Germany. Although the majority of the freight from the Rhine region found its way to Antwerp by water, a great deal of it still goes by road.

As a result the Port Authority issued a CfP to encourage intermodal operators to introduce a new rail shuttle or to upgrade an existing rail service. The projects selected by the Port Authority could count on limited financial support during a certain period of time.

A spokesperson for the authority said: “A significant proportion of the cargo between Antwerp and the German hinterland will also have to be carried by rail in the future. As a Port Authority we want to support all projects that contribute to this essential modal shift.”

H&S Container Line began with a new, direct, open rail connection to Andernach in December 2016. The intermodal train does one round trip per week between Andernach and quays 1700 and 1742 in the Deurganck dock. To raise the frequency to two round trips per week H&S submitted a project with a request for financial support.

Heiko Brückner, CEO of H&S Container Line, said: “The subsidy from the Port Authority will enable us to offer a sustainable rail product both for customers in Antwerp and for those based in the Rhine region, to supplement the already well-developed barge services. Andernach lies right in the middle of the region covered by the CfP, and so the Port Authority was interested in this project right from the start.”

Traction is being provided by DB Cargo, further evidence of the German operator’s belief in the further development of Antwerp as a rail port. DB Cargo aims to boost the share of rail transport in the modal split, which means that new rail products will have to be developed. “For this reason we seek more intensive collaboration with the port of Antwerp,” said a spokesperson for DB Cargo.

The Port Authority’s first CfP to improve rail services for a particular region came at the end of 2015, with the aim of developing rail connections between the Port of Antwerp and central & eastern Europe. Three projects were subsequently chosen in March last year, with new rail services to Poland, the Czech Republic and Austria respectively.

“Although our financial support has to be limited in order to comply with the rules for state subsidies, it still provides useful help for rail operators to introduce additional services, since the rail market is very capital-intensive,” added the port authority spokesperson.