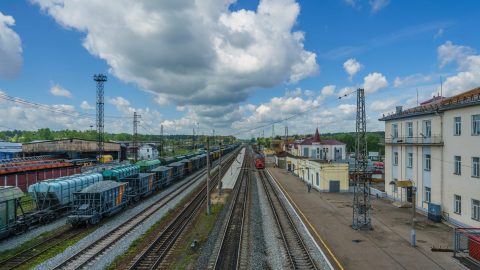 The consecutive pilot services along diverse routes of the International North-South Transport Corridor (INSTC) in the past months are finally bearing fruits for the Russian Railways. RZD launched the first regular INSTC container train service linking Chekov near Moscow and the Iranian port of Bandar Abbas. The service will, for now, offer one monthly roundtrip.

The new train service will transit via Kazakhstan and Turkmenistan before crossing Iranian territory to link with further destinations, like India, via sea services. According to RZD, after crossing Russia, Kazakhstan and Turkmenistan, the train will stop at the Sarakhs station in Iran, where containers will be reloaded on standard gauge (1435 mm) before they continue their trip. “On the way back, the train will also be loaded with products for the Russian market,” said RZD.

Tests in all directions

For the record, the INSTC is not a single-dimensional corridor. It links north to the south; however, it does not follow just one route. In contrast, it follows different branches: the western, the middle and the eastern. The western, which still needs to be completed, crosses Russia, the Caucasus region (Azerbaijan) and Iran before reaching Iranian ports. The middle one goes from Russia through the Caspian Sea before reaching Iran. The eastern one, which is the one for RZD’s first official service, involves Kazakhstan and Turkmenistan and, of course, Iran. All of them abut to Iranian ports and sea connections to other destinations, mainly India.

RZD started doing tests through this branch as early as July, when it sent the first container train destined for India, specifically the port of Nava Sheva. That test train followed the same route as the official service will follow. However, between July and late October, RZD did not reduce to one pilot service, as at least six more trains followed the route before opening it up for traffic.