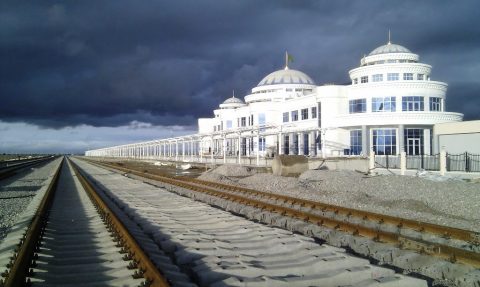 A new stop on the Russia-Iran corridor: port of Turkmenbashi

Turkmenistan will join India, Russia, and Iran on the International North-South Corridor (INSTC). The countries signed agreements towards this end last week during the Ministerial Transport Conference of Landlocked Developing Countries, held in Avaza, in Western Turkmenistan. With the addition of Turkmenistan, the corridor connecting Russia and Iran has acquired an additional route option.

Agreements for the construction of the corridor have been signed by 13 countries, including Azerbaijan, Belarus, Bulgaria, Armenia, India, Iran, Kazakhstan, Kyrgyzstan, Oman, Russia, Tajikistan, Turkey, and Ukraine. When fully completed, the corridor’s infrastructure is expected to be able to handle 15 million tonnes of cargo per year.

New stop on the corridor

With the Turkmenbashi port on the corridor, the route through Azerbaijan is no longer the only transit possibility. The port lies on the Caspian Sea, where vessels operate to ship cargo from train to train on all sides. Earlier, a multimodal service was launched crossing the same landlocked ‘sea’, with a vessel sailing between Russia and Iran directly.

The importance of this corridor has increased for Russia, as it is looking to diversify its trading routes amidst heavy sanctions imposed on the country. The INSTC is expected to cut the transit time between Mumbai and Moscow in half, based on the route via Azerbaijan.

Turkmenistan looking for new routes to the UAE

With access to the INSTC, new options arise for Turkmenistan. At the conference, Turkmenistan’s Deputy Prime Minister and Foreign Minister Rashid Meredow, and UAE Minister of Energy and Infrastructure Suhail Al Mazrouei discussed the possibilities for new routes and stronger collaboration between the port of Turkmenbashi and the ports of Dubai and Abu Dhabi.

Moreover, the Russia-Turkmenistan agreement was signed, and Turkmenistan made a pact with Georgia and Moldova for better transport connections. Among the issues debated in these agreements, there are the simplification of the visa regime for participants of international road transportation and the removal of barriers to the development of bilateral and transit road cargo transportation.

Additionally, the Additional Protocol to the Agreement on the Establishment of an International Transport and Transit Corridor, known as the Ashgabat Agreement, was signed by Turkmenistan, Iran, Uzbekistan, and Kazakhstan. It aims at creating an international transport and transit corridor that facilitates the transportation of goods between Central Asia and the Persian Gulf.

Among the issues discussed are the unification and definition of a single end-to-end tariff in rail freight transportation, as well as the parity amounts of fees and payments charged when crossing state borders for transport services related to road transportation.

At the conference, Iran claimed to expand the transit of liquid fuel from Turkmenistan to neighboring countries, after previous successful experiences. The two sides also discussed the issue of Turkmenistan’s access to the ports in south Iran, such as Chabahar to Bandar Abbas, which would provide access to international water for Ashgabat.