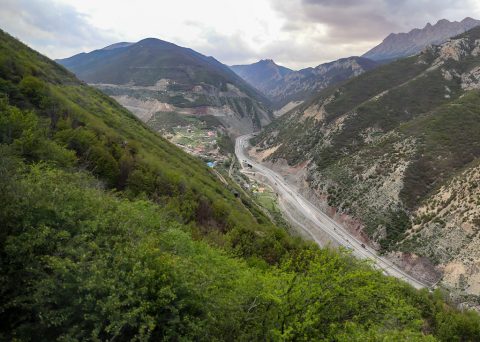 Iran is negotiating with Georgia, Armenia, Azerbaijan, Bulgaria, and Greece to launch a new multimodal corridor. The Persian Gulf-Black Sea project will connect the two regions using rail and sea links. It is an ambitious project given the complications in the countries involved. Still, why does Iran want it?

The Iranian Deputy Minister of Economic Diplomacy, Mehdi Safari, stated recently that there are ongoing negotiations between the countries involved and that “we may see the emergence of an important transport corridor with various routes to facilitate trade between the countries of the region and the outside world as soon as next May.”

How feasible is such a corridor, and why would Iran turn its focus there, even if other projects in the region could be prioritised? We look into the topic with the help of Amir Asri, international rail business development manager at Iranian company MAPNA.

“Rail freight will have a main role in this corridor,” says Asri. “This north-south railroad will originate in the city of Julfa, in northwestern Iran, and connect it with Azerbaijan’s Nakhchivan exclave before continuing to Yerevan and Tbilisi. The Nakhchivan–Yerevan railway route could replace the presently used but costly and difficult rail route from Yerevan to the city of Meghri, on the Iranian-Armenian border. Superseding this transit link will be a crucial stepping stone for fully realising the Gulf–Black Sea corridor. In the South of Iran, the port of Bandar Abbas has the central role for sea transportation,” highlights Asri.

However, the problems that the project will face seem more than the opportunities it will offer. Specifically, infrastructure is once again insufficient in Iran. “The missing rail link between Astara-Rasht is the major problem, so still, there is a great need for trucking and RO-RO to transfer goods between Azerbaijan and Iran, and vice versa”.

On the other hand, there are many rail links between Georgia, Armenia, Azerbaijan. Still, the political tension in the grey zone between Armenia and Azerbaijan is a significant disadvantage in terms of using those rail lines. On top of that come the US sanctions imposed on Iran, which would make the development of links practically impossible even if everything else was ideal.

Launching a fully functional corridor from the Persian Gulf to the Black Sea sounds like a dream coming true. The potential of such a link is huge since it could connect two estranged economic areas, both very strong, with the possibility to extend further to Western and Eastern Europe in the north and India in the south.

Investments could also facilitate the development of other regional projects like the International North-South Transport Corridor (INSTC) and put India on the map of Central Asian transport with links to Europe and Russia.

The Persian Gulf-Black Sea project has a reasonable cause in this sense. However, a question comes to mind. Why would Iran want to launch a multimodal corridor through territories with proven issues when it can reach the Black Sea via Turkey?

The answer to the question above is quite complicated. Asri explained that even though Turkey and Iran are working together, they somehow have a conflict of interest in this case. Their relations have been tense lately since Turkey, albeit informally, blocks Iran from using its rail routes to reach Europe.

The problem’s root is the situation between Armenia and Azerbaijan. RailFreight.com has analysed before how the relations between the two countries are one of the main reasons behind the stagnation of the INSTC. Iran is closer to cooperating with Armenia, while Turkey backs Azerbaijan. “The conflict in Nagorno-Karabakh has the greatest impact on the issue. Turkey is a key stakeholder in the conflicts and empowers Azerbaijan to overcome Armenia and block the Iran-Armenia border,” explains Asri.