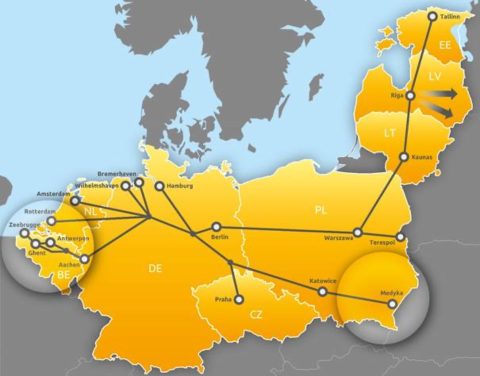 Three new additions to the North Sea-Baltic Rail Freight Corridor (RFC NS-B) aim to enhance connectivity and make the corridor even more competitive. The ports of Zeebrugge and Ghent in Belgium, the port of Terneuzen in the Netherlands and Medyka, the only inland destination, in Poland are the new entries with a lot to offer.

The new destinations are active in the corridor as of 10 January 2022. Medyka, Zeebrugge and Ghent will become main lines in the corridor, while Terneuzen will function as a connecting line. It is important to mention that Ghent in Belgium and Terneuzen in the Netherlands link to each other via the Ghent-Terneuzen Canal, also known as Sea Canal, comprising what is known as the North-Sea port.

Adding to the existing ten ports belonging to the corridor, Zeebrugge and North-Sea ports are crucial rail freight players that will add value and “provide new business opportunities”. Their addition is “of strategic importance for the companies wanting to transport their goods safely and efficiently and contributes to the modal shift to rail. Reliable rail freight services, accessible to all, is the way forward and beneficial for both the environment and the economy,” says the RFC NS-B in an announcement.

The port of Zeebrugge has a clear focus on rail freight that occupies around 15 per cent of its overall cargo transport. It has multiple rail freight connections, for instance, with France, Italy, Spain, and Poland. On top of that, last year, it merged in one port company with the port of Antwerp, which already belongs to the RFC NS-B. their goal is to become the biggest container port in Europe, and one can only imagine the possibilities emerging from such a development.

On the other hand, the North-Sea port (Ghent-Terneuzen) has an equally interesting potential. The European Commission had announced since February 2021 that it aimed to include the Ghent-Terneuzen Canal zone in the North Sea-Baltic RFC. The North-Sea port, which already belongs to the Rhine-Alpine and North Sea-Mediterranean RFCs, keeps rail transport on top of the agenda. 7 to 8 million tonnes of cargo enter or leave the port by rail every year. That is 10 per cent of all freight transport between the port and the hinterland, a relatively high share compared to other ports in western Europe. More than 300 trains come and go every week.

Apart from the ports in the Benelux area, the North Sea-Baltic RFC acquired another station on the Poland-Ukraine border. Medyka, a border crossing and promising terminal will “improve the land bridge between Europe and Asia in the context of the growing traffic between East and West.” “The extension of the corridor to Medyka is another step on the way to improve rail transport to the East and Asian countries, increasing the transport potential of this Corridor and expanding the transport offer, which positively fits in the diversification strategy of PKP PLK” explains RFC NS-B.

Medyka terminal was originally used for the transport of iron ore. Indeed the terminal is part of PKP’s diversification strategy, with PKP Cargo aiming to “turn Medyka into a new Malaszewicze”. However, since rail transport of this commodity was suspended, PKP Cargo purchased two reach stackers to handle containers. Currently, it can handle 3-4 trains per day. One of the main advantages is that the terminal offers transhipment from narrow to standard gauge (1435mm to 1520mm). Moreover, it offers storage possibilities, so the transhipment does not need to be carried out wagon per wagon, as in nearby terminals.