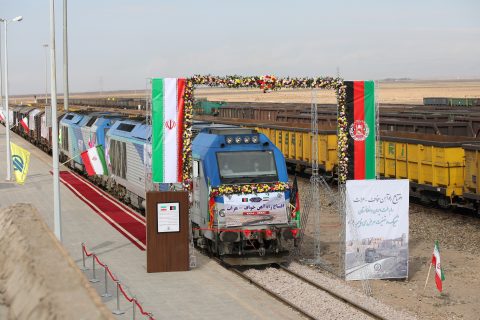 Published on 24-08-2021 at 13:06
The first train departs Khaf's rail station in Iran during the inauguration of the Herat-Khaf railway operations connecting Iran and Afghanistan.

ANALYSIS – Rail freight connections to Afghanistan have been high on the agenda for governments in the region, as they could open up Central Asian markets for countries in the southeast of Asia, most notably India. Now that the Taliban have taken over control in Afghanistan, the power balance in the region is about to change. What does this mean for the rail freight plans in the region?

The takeover of the Taliban has dominated the news all over the world. Apart from a change of government in Afghanistan itself, it means a possible shift in political relations with neighbouring countries. Although it is not yet the most important aspect to be discussed at this point, this might mean something for international rail as well, especially for those countries that have heavily invested in rail connections in the regions: India and Iran.

In India, the realisation that rail freight projects could well be jeopardised by the recent shift in power has already hit. Right after the takeover, headlines were describing a possible risk to one of the most important investment projects: that in the port of Chabahar. This Iranian port is the only port not subjected to US sanctions. Moreover, it lies much closer to India than the competing port of Bandar Abbas. It is the ideal gateway into Iran for India, and for the Southeast Asian region as a whole.

The importance of this port to India is not just Iran. Rather, Iran serves as a transit country to landlocked Afghanistan. Afghanistan, and also Uzbekistan, are important trade partners of India. Even without the completion of the highway and rail system between Chabahar and the Iran-Afghanistan border, India successfully shipped 110,000 tons of wheat and 2,000 tons of pulses to Afghanistan in 2018, according to India’s Center for Strategic & International Studies. Afghanistan in its turn is rich in natural resources. Many would argue that the investments of India in the port of Chabahar serve this purpose alone: opening up the Central Asian market for the Southeast Asian region, with India playing a leading role.

Until now, India has been the main partner of Iran in developing the port’s potential. In 2014, Iran and India signed an MOU, which translated into a ten-year contract for equipping and operating the port. With the takeover of the Taliban in Afghanistan, the future of this project is no longer secured. A few weeks ago, it proposed to include the Chabahar port in the International North-South Transport Corridor, rather than Bandar Abbas, which is currently the point of departure for the overseas journey. The previous government in Afghanistan signed a transit agreement with India and Iran to complement the port project, and even the US was in favour of the investment in the Iranian port, as it would support the recovery of Afghanistan.

However, the Taliban are traditionally more friendly towards Pakistan, a political rival of India, and with alternative transport solutions to Afghanistan. Pakistan has the port of Karachi, from where an overland route to Afghanistan is a relatively short distance. This would avoid transit through Iran, which is subjected to US sanctions. Although the Taliban has not mentioned the project just yet, many fear that the future role of the port of Chabahar can be written off. “The Taliban takeover could be the final nail in the coffin for the Chabahar port project”, writes the Hindu Business Line. Cargo volumes have been on a decline due to Covid, with the Taliban seizing control of Afghanistan, the port project is under a cloud, the Indian news outlet describes.

India is not the only country noticing this cloud. Iran too is concerned about the future of its rail connections with Afghanistan. Recently, it opened the vital Khaf-Herat railway line, the infrastructure that provides the anticipated access to the landlocked country. The first train took off in December 2020, but this did not mean the completion of the project. The train covered a distance of 138 kilometres between Khaf and the town of Rozanak in Afghanistan. From there, it needs to be expanded with an additional 85 kilometres to reach Herat ultimately.

What is more, since the opening only one more train has departed. “Presently, there is no regular rail service between Iran and Afghanistan”, explains Ali Abdollahi from Iranian Railways. “An agreement for operation has been prepared by the respective railway companies of Iran and Afghanistan, including the details and conditions for operations. This agreement was about to be signed by the authorities, even the date of signing had been determined. But due to the recent situation in Afghanistan, this signing has been postponed”, he explained in the Iran edition of RailFreight Live.

Whether this agreement will be signed remains to be seen. The same is true for the expansion of the infrastructure, which concerns a railway track in Afghanistan. This expansion is divided into two projects, for which the contracts are ready, explains Abdollahi. “The fourth section of the Khaf-Herat segment (with the length of 43 km) has been awarded to a company from Kazakhstan and a proposal for the construction of the second phase of the fourth section (with the length of 44km) was under the consideration of the consultative team of the Italian government.”

Another interesting development to keep an eye on, is the formation of the India-Uzbekistan-Iran-Afghanistan Quadrilateral Working Group on the joint use of Chabahar port. This agreement was only signed a few weeks ago, and indicated the willingness of Afghanistan to cooperate in improving the connectivity between these countries. A meeting of the joint group was to be held later this year, but nothing is certain now, as one can only speculate about the intentions of the Taliban.