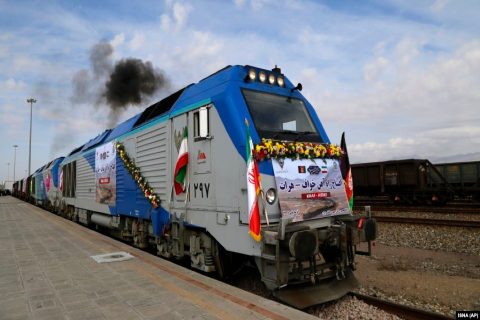 As of Thursday 10 December, Iran and Afghanistan are connected by rail. The launching of the Khaf (Iran)-Herat (Afghanistan) railway line was accompanied by the first freight train carrying agricultural goods. A week earlier, a test train transported 500 tonnes of cement between the two countries.

The shared railway network of the countries has been under construction since 2007. The overall costs for its completion reached the amount of 75 million US dollars with its length being around 220 kilometres. Seventy-six of these kilometres are located in Iran and the rest in Afghanistan. Currently, the line is not fully operational as the train covers a distance of 138 kilometres between Khaf and the town of Rozanak in Afghanistan. Subsequently, the line will get expanded in the future with an addition of 85 kilometres, to reach Herat ultimately.

In a digital ceremony that took place for the opening and first operation of the railway network, political leaders of the two countries underlined the importance of the project. The two nations are culturally and historically intertwined. Such a development will be crucial for the strengthening of their relations, and an “economic leap” for the broader region, as the Afghan president Ashraf Ghani described it.

In 2016 Afghanistan opened its first cross-border rail link with Turkmenistan, with a potential of expanding the connection to Tajikistan. The landlocked country was in a constant search for gateways in the East-West transportation corridors and to ports that would grant it with access to the sea.

The specific development will have two direct results. First of all, Afghanistan will now have access to the sea through the Iranian ports at the Persian Gulf. Secondly, and through the Iranian railways network, the country can now connect with Turkey and respectively with Europe.

The whole infrastructure project can provide Afghanistan with a new status in the entire region. Since it now connects with other countries in the East-West corridor, it could gradually play an essential role as a transit country for transportation between China and Europe.

Together with Iran, Afghanistan is currently in discussions with China, the Kyrgyz Republic and Tajikistan, to explore the opportunities of a new route that will connect East and Europe, and will pass through the recently conjoined countries.

Additionally, another possibility could appear from India’s side. India also got involved and contributed to the integration of the Khaf-Herat rail project. As a result, it is willing to enhance its connections with Afghanistan further and provide the country with other vital destinations, for instance, Russia.

Understandably, possibilities are now springing up one after another. Seeing regional countries among the New Silk Road developing is always a positive fact since they also provide chances for the opening of alternative trade routes that could decongest the existing ones. In any case, the rail sector is continuously aiming towards this direction, so the news about Afghanistan can also be considered a big step and a meaningful success.