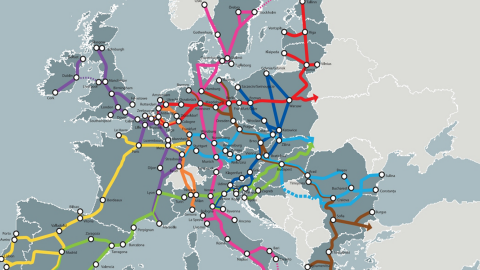 Train path capacity on the core network corridors in Europe can be offered in a much more efficient and attractive manner. A single, digital system called the C-OSS should facilitate this. However, there is only little response to the innovation as it is just not familiar in the sector yet.

This was the conclusion of the C-OSS Community, which was assigned the task to improve the current capacity offer, one of the priorities set at the TENT-T Days in Rotterdam, in 2016. In the medium term, the aim is to allocate, coordinate or support the majority of the entire international rail freight market along the corridors and connecting lines via the C-OSS.

The project consists of several elements, among which the short-term capacity pilot. When a customer requests a train path not long before the journey is carried out, this is considered a short-term request. The deadline of such request is thirty days before departure. With such a deadline, this product answers rather the mid- than the short-term needs for capacity, according to the project team.

The market requires two different products with two different deadlines: thirty days and three to five days. The short-term capacity offer would then only serve the ad hoc traffic, they write in a recent progress report. A pilot was carried out on four corridors, offering a product with an eight-day deadline.

Nevertheless, only six capacity requests were placed on two corridors, while none were placed on the other two. “Not per se the tool in itself remains to be a problem, but especially the fact that this is only for the very first time that short term planners are asked to use this tool, makes this a brand new process, with a considerably high stepping stone”, the report reads.

In the pilot, capacity in the Alnebru terminal in Norway, the Port of Duisburg in Germany and the Port of La Spezia and Interporto di Bologna in Italy was allocated completely in line with the distribution of the Pre-arranged Paths (PaP’s), meaning that it could be requested at the same time, or at least while taking into account the train path requests as both products are publicly available. Despite this effort, no such requests were placed during the pilot.

More successful were efforts to maximise the Pre-arranged Path (PaP) capacity. “One of the main problems cited by clients is the fact that the capacity offer via the corridors is only a fraction of what the market actually needs”, the project describes.

This can be overcome by offering all pre-constructed international capacity available as PaP, with on certain border points even the offer of all available slots for international freight being offered through the corridor, it continues. On the North Sea-Mediterranean Corridor, this was done for timetable 2019 (publication January 2017) On borders between the Netherlands, Belgium, Luxembourg, France and Switzerland all harmonised border times were offered as PaP’s.

“While the capacity published increased with almost seventy per cent, the volume of requests increased with almost 85 per cent. This clearly shows that when the capacity offer is adequate compared to the capacity needed by the market, the clients’ will to work with the PaP catalogue, and the client acceptance and appreciation of the PaP concept will increase. Only when the majority of available capacity of international freight is managed through the C-OSS, the added value of the role of the C-OSS will be recognised”, the report stated.

According to the project team, the hurdle of the unfamiliar can be explained as the request has to be done through an interface, called PCS. “It remains a fact that the use of PCS requires more effort from the customer than merely placing a national request, especially in the (most widespread) case where the client only requests capacity for one or maximum two infrastructure managers.”

The overall use of one capacity ordering tool for international freight is a key element if the corridors want to reach their full potential, the team believes. “Today, the only available tool for this is PCS. However, if we want to reach our goal with PCS, or any other tool, the existence of functional interfaces between the international platform and all national construction systems is critically needed. A long term objective should be the design of a single and common European capacity ordering tool, used for all capacity requests”, the report concludes.