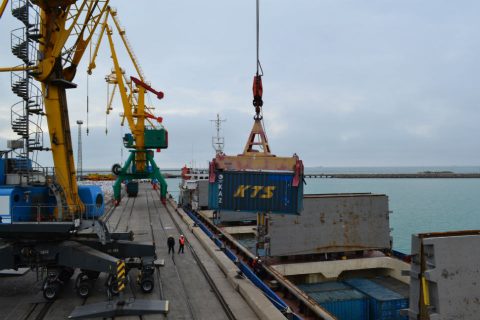 On 5 April, the first-ever feeder vessel carrying containerised cargo departed from the Port of Aktau in Kazachstan, on its way to Baku in Azerbaijan. Until now, container traffic on this part of the Middle Corridor was not possible. The service is described as a major milestone for the alternative route on the New Silk Road.

Until now, Port of Aktay handled mainly dry bulk with general goods such as grain crops, metals, etc. Due to this, opting for the Middle Corridor, which takes cargo from China to Kazachstan, across the Caspian Sea to Azerbaijan, Georgia and Turkey, was just not a viable option. Containerised transit possibilities would change the situation. “Containerisation is fast, sleek, and is perfectly-suited to the inherently multimodal nature of Aktau. If you have containers than you can ship anywhere,” Martin Voetmann, a logistics specialist working at Aktau seaport for DP World was cited in Forbes last year.

The vessel carrying out the service is called Mahmud Rehimov, a ship owned by the Azerbaijani Caspian Shipping CJSC (ACS CJSC). Seventy twenty-foot containers with Kazakhstani wheat and lentil were stowed on the vessel. In Baku, they are transported by truck to continue on the railway of Azerbaijan. From there, the cargo will enter the new Baku-Tbilisi-Kars railway, on the way to the Port of Mersin in Turkey. 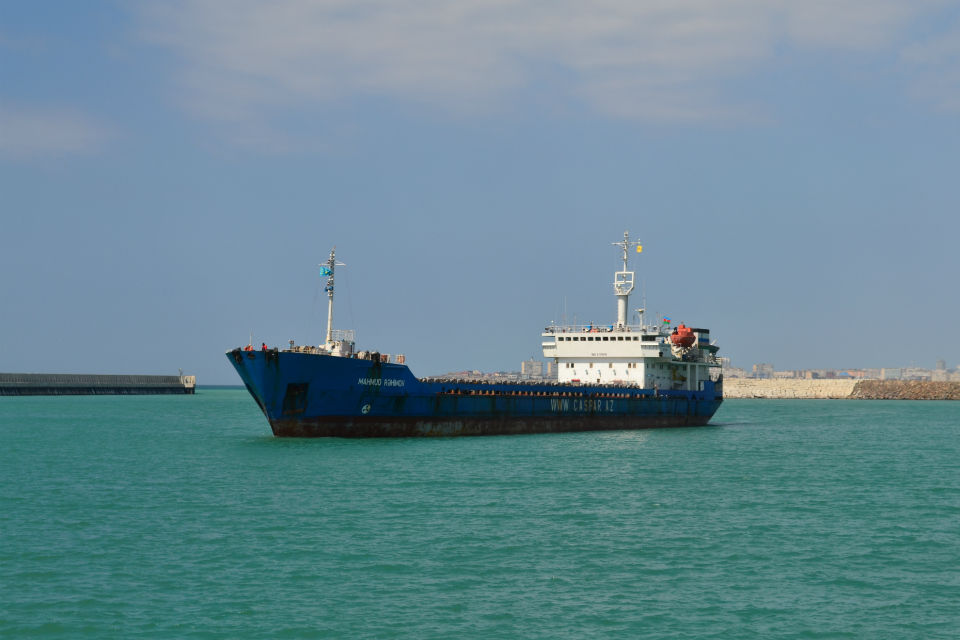 The vessel journey should not exceed 36 hours, while handling time at both ports should not be more than 24 hours, said the International Association “Trans-Caspian International Transport Route (TITR). “In future, the feeder vessel will be plying on the route Port Baku – Port Aktau – Port Baku on a weekly basis. The next sailing of the vessel is scheduled on the 11th of April. On top of that, the next container shipping will also include transit cargo, such as tomato paste transporting from China to Italy via the Middle Corridor”, the organisation promoting traffic on the corridor said.

President of the Aktau International Sea Commercial Port JSC, Abay Turikpenbaev said: “As from now, the Port of Aktau will focus on the development of regular container services on the Caspian Sea for the use of the Middle Corridor. This is absolutely new business for our company. We are convinced that there will be more feeder vessels through our port.” The ambition is to operate a second feeder ship on the route this year to enable a capacity increase on the Middle Corridor.

This corridor has been developed over the past two years, with the first test container train from China arriving at Baku International Sea Trade Port in August 2015. In October 2016, Kazakhstan, Azerbaijan and Georgia signed an agreement to establish the TITR Association with its office in Astana, the capital of Kazakhstan.

Thanks for the information FREMONT MARINE’s commitment is offering our clients peace of mind at sea, offshore, and onshore Marine Services in UAE believe the reliability and trust

This is very informative and interesting