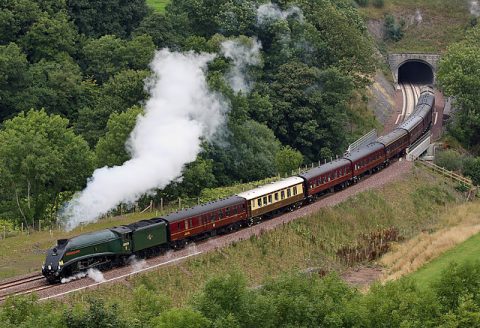 What is the future for UK’s royal train?

Published on 20-09-2022 at 09:32
Royal Train on Borders Railway hauled by 60009 Union of South AfricaWalter Baxter and licensed for reuse under creativecommons.org/licenses/by-sa/2.0

With the solemn formalities concluded for the funeral of Queen Elizabeth, the royal household is looking very much to the future. The new monarch will have a daunting list of priorities, and a long list of British institutions seeking his indulgence. So King Charles may be excused if he is not immediately minded to address one particular institution that also has a place the heart of the nation – the future of the Royal Train.

There was no small measure of disappointment that the royal train did not figure in the extensive logistic operation to return the late Queen Elizabeth from Balmoral in the north of Scotland to London, and her subsequent final journey to interment at Windsor Castle. Nor was there any call upon the train to convey the new King Charles III as he completed a lightning fast tour of the four countries of the United Kingdom. Questions have already been asked if there is a place in the Carolean monarchy for a mode of transport first utilised in the Victorian era.

Given that responsibility for tractive effort falls to the rail freight community (DB Cargo UK has two locomotives allocated to the task) and that heritage organisations often provide historic steam traction, there was reasonable disappointment that the task of returning the coffin from Edinburgh was given to the Royal Air Force. While, logistically, there were good reasons for flying, the choice did deny many more loyal subjects the opportunity to pay their respects at the line side, and on the platforms, at towns and cities along parts of the East Coast and Midland Main Lines.

The huge crowds of respectful well-wishers who lined the roadsides for almost two hundred miles (360km) from Balmoral on Royal Deeside, to the Palace of Holyroodhouse in Edinburgh, showed the world the popularity of the Queen, across a wide swathe of Scotland. There’s no reason to assume that the same would not have been repeated throughout England. However, safety concerns associated with marshalling large crowds along a four hundred mile (640km) railway route perhaps proved too much of a risk to life and limb.

The train is a huge draw

It has however been widely reported that the royal train did figure in drafts of ‘Operation Unicorn’, the official plans for returning Elizabeth from Balmoral, should the need arise. In less solemn times, the royal train has proved a huge draw in itself. When the late Queen opened the Borders Railway in Scotland, large crowds gathered all along the largely rural route. A one station, Stow, where the train did not even stop, the estimated crowd was greater than the population of the town it served.

While for ceremonial duties, the train has often been hauled by a heritage steam locomotive, the formation is habitually backed up by a diesel – providing train power and additional brake force. Occasions like that have strengthen calls for the train to be retained, despite the operational costs. On the other hand, there is a movement that says a royal train exhibition could play a far more tangible economic benefit to any chosen community. In evidence for that, the retired royal yacht Britannia has become a hugely popular static attraction in Leith Docks, Edinburgh. There could be greatly increased interest in the National Railway Museum at York, which already has an extensive passenger and freight collection on display.

There would have been no insurmountable problems in mobilising the royal train. The train is kept in a state of readiness at the railway works in Wolverton, nearby the Network Rail operational headquarters in Northamptonshire (and a possible location for static display should the train follow the lead of the royal yacht). Moving it north, including the specially configured funeral carriage, would have been routine, whether to Edinburgh or even Aberdeen. Unfortunately, as many residents agree, the local Royal Deeside line to Ballater, just eight miles (under 13km) from Balmoral, was closed in 1966 – remarkably thirteen years after Queen Elizabeth came to the throne.

The previous two monarchs both died at Sandringham, a royal residence in the north of Norfolk. Not quite as far removed from London as Balmoral, but remote enough to encourage the use of the royal train, in the age before the ubiquity of trunk roads and motorways. Therefore, the choice of road and air transport breaks a two-centuries old tradition, and leave the rail freight community to offer their respects from afar.