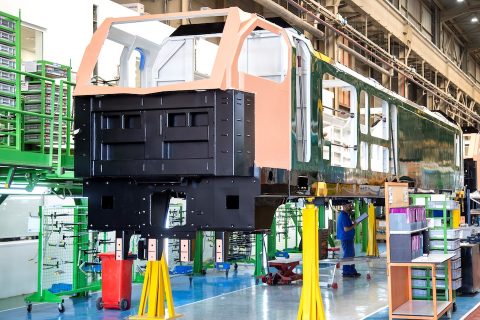 A little more than a year after signing the contract, the Rail Operations Group project to bring tri-mode mainline freight traction to the UK is stepping forward on the production line. Manufacturers Stadler have finished the first body shell for the initial order of ten designated Class 93 locomotives.

Rail Operations Group have ordered a versatile fleet of locomotives from Stadler, to service their diverse portfolio of contracts. The batch on order can operate from overhead power, battery and an onboard diesel engine. When finished, the units will move from the factory in Valencia to the UK for proving sometime early in 2023.

Tailored to the UK network

With the UK network unlikely to be fully electrified anytime soon, specialist services provider Rail Operations Group have been pragmatic about their fleet development requirements. When RailFreight broke the news just over a year ago, ROG had just put pen to paper with manufacturers Stadler for a unique version of their popular Bo-Bo platform.

Stadler is now fully producing the Class 93 locomotive fleet and has finished the first body shell, tailored for the UK network. Assembly of all the components and sub-systems will soon begin. After testing and approvals, the first locomotive is scheduled to be transferred to the UK in March 2023. Entry into service is set to take place a few months later.

A project of firsts

“This is a project of firsts”, said Iñigo Parra, CEO of Stadler Valencia. “The Class 93 is not only the first tri-mode locomotive to run in the UK, but it’s Stadler’s first tri-mode locomotive, illustrating our commitment to green technology and genuine desire to help governments and businesses around the world de-carbonise their cities, towns and villages.”

Variations on the theme of tri-mode have already been seen operating in the UK. For over a year, passenger operators in England and Wales have been using multiple units converted from a venerable British Railways design. ROG also has their sights set on tri-mode conversions – although their conversions are destined to go further, and provide the effort behind planned express logistics traffic, a modern take on the parcels traffic of years gone by.

The new locomotives under construction for ROG are destined for the sort of heavy work and recovery duties in which the company seeks to specialise. The design borrows heavily from Stadler’s Class 68 and Class 88 locomotives, which have been operating successfully in the UK for several years. Most importantly, the 4,600 kW units will be capable of a flat-out 110mph (192kph). It doesn’t get much more express logistics than that.

Stadler recently signed another deal with a UK rail freight company, with an order for GB Railfreight to build bi-mode locomotives for their fleet.

But of course!
For sake of robustness at railways, redundancy, now urgently has to be provided for, at energy supply of train.
Sudden, unplanned stops, now plaguing ass well Industry as customers, has to be outed from railways!
(Just compare how success story of automobile was based upon the own energy converters, then by petrols, etc., etc.)
Advantage of railways, no longer shall be obstructed, by a technicality!
(Electrification, yes, but a timely!)