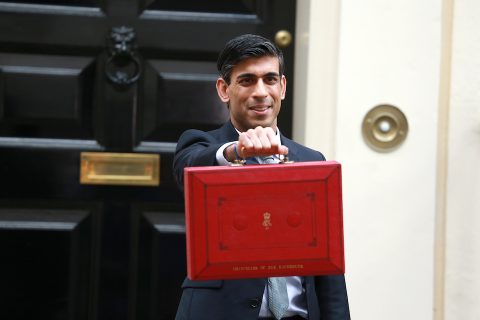 A railway industry representative body has called the UK Autumn Budget and Spending Review a missed opportunity to unleash the potential of rail. Consequently, it sets back the case for increased rail freight and adversely affects the environmental credentials of the UK ahead of COP26.

The Government Autumn Budget and Spending Review, commonly known simply as The Budget, was delivered to the UK Government last week by the Chancellor of the Exchequer, Rishi Sunak. The Budget set out investment plans for the coming three years, but a mention of the rail industry was thin on the pages.

Darren Caplan, Chief Executive of the Railway Industry Association (RIA), said it was nevertheless encouraging in some parts. “Whilst it is positive to see confirmation of what looks like an additional 1.5billion pounds [1.65billion euros] of funding for regional transport projects, including in rail, this Budget appears to be a missed opportunity to unleash the potential of the railways in helping the country to build back better”, he said.

According to Caplan, there was no indication in the statement of whether long-term, day-to-day funding of the railway network will be maintained at least at current levels in the years ahead. “We still don’t know what is in the Integrated Rail Plan for the Midlands and the North”, he said. “We still have uncertainty over major projects, such as HS2 Eastern Leg, Northern Powerhouse Rail and Midlands Rail Hub. We still await an update of the Rail Network Enhancements Pipeline, now more than two years since it was last published.”

With COP26 underway, Caplan says this would have been an ideal opportunity to set out the Government’s plans to reach a net-zero railway, including a rolling programme of electrification and fleet orders of hydrogen and battery trains. “These plans would have not just shown UK leadership in decarbonisation on a global stage, but would also significantly boost green jobs and investment, as the UK moves to a cleaner, post-Covid economy”, he said.

There could also have been some clarification on areas like digital signalling, with 60 per cent of traditional signalling needing replacing in the next 15 years, says Caplan. He also points to the suspended Tradeshow Access Programme, which helped exporters attend overseas events. “Budgets will be reinstated or replaced so that they can play their part in helping the country deliver on Global Britain ambitions,” he said. “It is clear that UK rail can play a leading role in the UK’s economic recovery, but to do this, the railway industry really does need greater sight of, and input into, the Government’s investment plans. Visibility of these plans is vital to supporting effective, reliable and clean world-class railway infrastructure and rolling stock in the coming years, boosting the UK economy and its connectivity not just now, at this critical time, but also for the years ahead as we move on from the pandemic.”