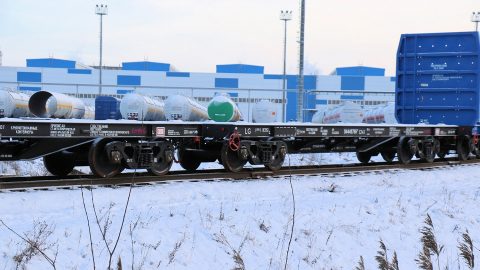 UWC will produce 200 Sgmmns flat wagons for Laude Smart Intermodal. They will be used for transporting high-cube containers on the rail network with a standard gauge of 1,435 milimetres (in a contrast to the previous batch constructed for operations on the broad gauge network of 1,520 milimetres). Each wagon will have a length of 40 feet in length, a bogie with an axle load of 22.5 tonnes and a loading capacity for carrying up to 74.5 tonnes.

Polish company Laude Smart Intermodal is one of the most dynamic logistics providers in Poland as well as in Central and Eastern Europe. It purchases new wagons in order to boost its service and develop the network. “We are doing everything we can in order to become a leader in selling logistics services in Central and Eastern Europe”, said Marcin Witzchak, CEO of Laude Smart Intermodal.

Currently, Laude’s network consists of three rail connections – from its intermodal terminal in Zamość to Moldova (Chișinău, Bălți, Râbnița), Ukraine (Kyiv, Dnipro, Kharkiv, Zaporizhia, Mariupol, Odesa) and Russia (Moscow, Saint Petersburg, Cherepovets, Magnitogorsk). This has resulted from the geographical location of the Laude’s facility. It is situated in 70 kilometres from the Ukrainian border and has direct access to the broad-gauge railway known the Metallurgy Line (Linia Hutnicza Szerokotorowa) operated by PKP LHS.

SAle of DB Schenker in sight, but what is the prize?